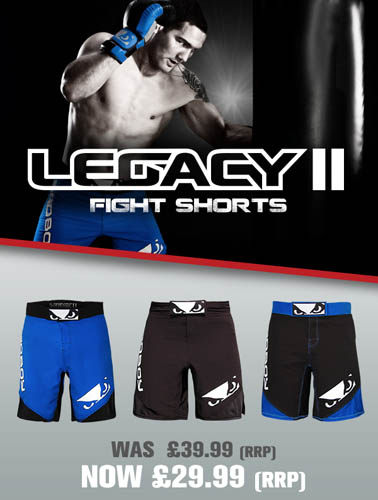 Save £10 on the Bad Boy Legacy II Fight Shorts at BadBoy-UK.com for a limited time!

The shorts were £39.99 but you can grab a pair for just £29.99 with the shorts in a variety of colours including blue, black, red and camo.

Until stocks last, you can get a Free Bad Boy Green Walkout T-Shirt when you spend $100 or more on Bad Boy gear at MMA Warehouse. With the iconic Eyes logo on the chest and […]

The sun’s out and what better way to look trendy and avoid sunburn on your scalp than one of these fresh snapback caps from fightwear brand, Bad Boy. Priced at £14.99 (were £19.99) each, the […]

Made from anti-bacterial fabric, these TapouT Renegade fight shorts are lightweight and comfortable for wearing during MMA practice. The velcro waist fastener and velcro fly ensure you and your training partner remain unscratched during grappling […]