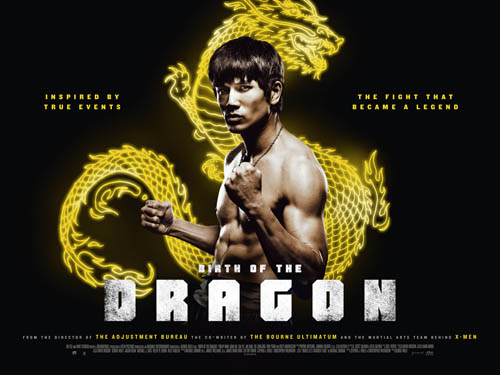 The new quad poster has been revealed for BIRTH OF THE DRAGON, a brand new film about Bruce Lee which arrives in UK cinemas on 23rd February 2018.

In the world of martial arts, there is one man above all: Bruce Lee. San Francisco, 1965. Young, hungry and looking for an opportunity to make a name for himself, Lee (Philip Ng) challengeslegendary Shaolin monk and kung fu master, Wong Jack Man (Xia Yu), to a fight when he hears that he’s crossing the Pacific to observe the state of kung fu in America. Their legendary fight would change the history of martial arts forever.

About Steph 822 Articles
I'm a 1st Dan Black Belt & certified coach in Japanese Atemi Ju Jitsu, have trained in Muay Thai and currently train in CSW (Combat Submission Wrestling) and CSBJJ at MCKG under Mel Corrigan. I love to compete and have medalled at openweight events. I've a total appreciation for all martial arts and always eager to learn new techniques!
Website Facebook Twitter

BIRTH OF THE DRAGON (2016) Directed by George Nolfi In UK cinemas now Ask anyone who their martial arts idols are and more often than not their answer will be Bruce Lee. The legend, who […]