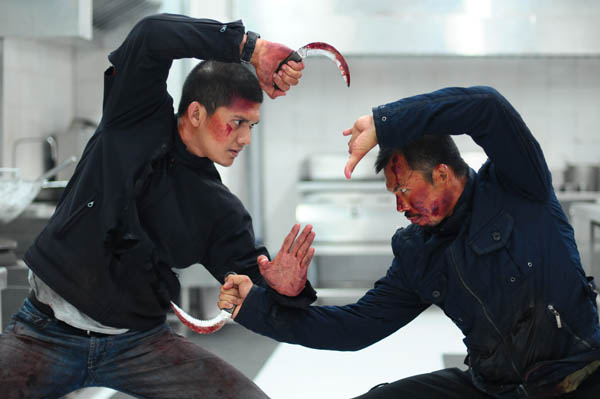 Gareth Evan’s martial arts action flick THE RAID 2 will be ass-kicking its way to to DVD, Blu-ray and limited edition Blu-ray steel book (exclusive to Entertainment Store on Play.com) on 11th August 2014 in the UK and is available to pre-order now from Amazon.

He thought it was over. After fighting his way out of a building filled with gangsters and madmen, rookie Jakarta cop Rama thought he could resume a normal life. He couldn’t have been more wrong. His triumph attracted the attention of the criminal underworld, and with his family at risk, Rama has only one choice – to go undercover and begin a new odyssey of violence.

THE RAID 2 brings all out action to the streets of Jakarta with fast paced, relentless action and a labyrinthine story of dark thrills that demands to be watched time and time again. Introducing new kick ass characters and mesmerising locations that will take your breath away, The Raid 2 expands on the unbelievable action from the first film and ramps it up to the max.

Featuring the greatest fight scene ever to be committed to celluloid, THE RAID 2 brings a darkly energetic vision to life with disturbing realism. With killer attitude and kickass style THE RAID 2 launches into a mind blowing display of violence and corruption as the world originally established in THE RAID escapes onto the streets of Jakarta bringing a whole host of new players to this deadly game of cat and mouse. A stunning burst of violence makes THE RAID 2 the must own flick of 2014.

Get ready for action as The Raid‘s Iko Uwais returns in HEADSHOT! A man (Iko Uwais) is discovered left for dead with a gunshot wound to the head, and, after months in a coma, is […]

Win THE RAID 2 Merchandise In Our Competition!

THE RAID 2 brings all out action to the streets of Jakarta with fast paced, relentless action and a labyrinthine story of dark thrills that demands to be watched time and again. Introducing new kick […]

Win Martial Arts Film THE RAID on DVD and Exclusive Quad Poster In Our Competition!

COMPETITION NOW CLOSED! Due to the hotly anticipated arrival of The Raid 2 in cinemas on April 11th, Entertainment One UK have re-released The Raid on DVD and Blu-ray with a special Cineworld 2 for […]