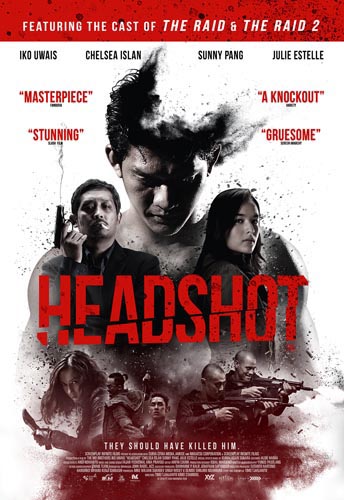 Get ready for action as The Raid‘s Iko Uwais returns in HEADSHOT!

A man (Iko Uwais) is discovered left for dead with a gunshot wound to the head, and, after months in a coma, is nursed back to health by young student-doctor Ailin. Realising that the man is an amnesiac, Ailin renames him Ishmael. When Ailin is kidnapped by a gang of dangerous criminals led by enigmatic crime lord Lee, Ishmael suspects his true identity is closely tied to these people. Determined to save the woman who rescued him, Ishmael has no choice but to confront his past. But every violent confrontation that Ishmael encounters brings him closer to a dark realisation, as a lethal personality begins to awaken within him.

Directed by Kimo Stamboel and Timo Tjahjanto AKA The Mo Brothers, HEADSHOT comes to UK Cinemas and VOD 3rd March 2017.

THE RAID 2 (2014) Indonesian language with English subtitles On Digital Download from 4th August 2014 On DVD, Blu-Ray and Steelbook from 11th August 2014 Set two hours after the events of the first film, […]

Gareth Evan’s martial arts action flick THE RAID 2 will be ass-kicking its way to to DVD, Blu-ray and limited edition Blu-ray steel book (exclusive to Entertainment Store on Play.com) on 11th August 2014 in […]