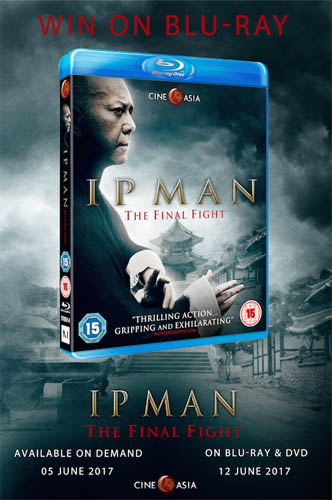 To celebrate the release of IP MAN: THE FINAL FIGHT, on DVD and Blu-Ray in the UK from 12th June 2017, we’ve two Blu-Rays to give away to our followers in our kick-ass competition.

In post-war Hong Kong, Ip Man is reluctantly called into action once more, when what begins as simple challenges from rival kung fu schools, leads to him becoming face to face with the dangerous underworld of the Triads. To defend himself and those he cares about, Ip Man must stand and fight one last time.

Follow and RT for your chance to win IP MAN: THE FINAL FIGHT on Blu-Ray! The movie is released on 12th June in UK. https://t.co/I1WP89rB2P pic.twitter.com/oYiaRnNW2g

The competition will close at 11.59pm GMT on Sunday 18th June 2017 and two valid entries will be chosen and notified via Twitter.

T&C’s
• This promotion is open to UK residents only.
• Entrants must be aged 15 years or older
• One entry per household
• There is no cash alternative to Prizes which are subject to availability, non-transferable, non-negotiable and non-refundable. Prizes may not be sold, offered for sale or used in connection with any other competition or promotion by the Prize winner
• 2 winners will each win 1x Blu-Ray of Ip Man: The Final Fight.
• The Editor’s decision is final and binding on the entrants. No correspondence will be entered into.