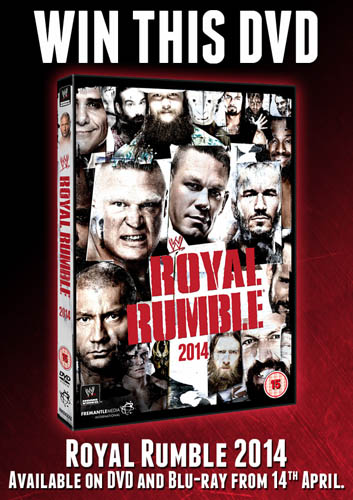 All the action from the Consol Energy Center Pittsburgh as 30 WWE Superstars competed in the Royal Rumble match for the chance to face the WWE World Heavyweight Champion at WrestleMania 30!

To support the release of Royal Rumble 2014 (out on DVD and Blu-ray from 14th April), we have a copy on DVD to give away to one lucky winner (courtesy of FremantleMedia International).

For your chance to win a copy of WWE ROYAL RUMBLE 2014 on DVD, answer the following question correctly:

Who does Brock Lesnar wrestle against in WWE Royal Rumble 2014?

To enter, just send your answer along with your name and address to contact@shop4martialarts.co.uk with the subject ‘Royal Rumble 2014 Competition‘.

The competition will close at 11.59pm GMT on Wednesday 30th April 2014 and one winner will be picked at random from the correct entries.

T&C’s
• This promotion is open to UK residents only.
• Entrants must be 15 years or over
• One entry per household
• There is no cash or other alternative to the prize stated and the prize is not transferable and no part or parts of the prize may be substituted for other benefits, items or additions.
• 1 winner will win 1x WWE Royal Rumble on DVD
• The Editor’s decision is final and binding on the entrants. No correspondence will be entered into.

WWE TLC: TABLES, LADDERS, CHAIRS 2012 On DVD and Blu-Ray from 25th March 2012 TLC, or Tables, Ladders and Chairs, is one of the finest events in the WWE, with the wrestlers going all-out with […]