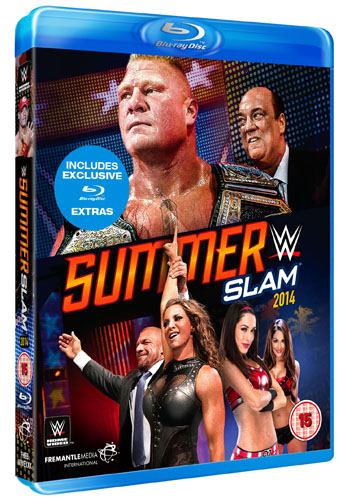 To celebrate the release of the annual WWE summer tradition that is SummerSlam on Monday 27th October, we have a Blu-ray copy of SummerSlam 2014 to give away PLUS 3 other randomly selected WWE DVD and/or Blu-Ray titles!

This year the event proved to be very noteworthy with occurrences changing the landscape of the WWE in ways not thought possible!

Available to order today from http://WWEDVD.co.uk – the official distributor of WWE DVD/Blu-ray titles in the UK

For your chance to win a copy of WWE SummerSlam 2014 on Blu-Ray and 3 random WWE titles, answer the following question correctly:

Who is Daniel Bryan’s wife?

To enter, just send your answer along with your name and address to contact@shop4martialarts.co.uk with the subject ‘SummerSlam 2014 Competition‘.

The competition will close at 11.59pm GMT on Saturday 8th November 2014 and one winner will be picked at random from the correct entries.

T&C’s
• This promotion is open to UK residents only.
• Entrants must be 15 years or over
• One entry per household
•The promoter of this competition is Fetch Dynamic Ltd
• There is no cash or other alternative to the prize stated and the prize is not transferable and no part or parts of the prize may be substituted for other benefits, items or additions.
• 1 winner will win 1x WWE SummerSlam 2014 on Blu-Ray plus 3 random WWE titles on DVD and/or Blu-Ray
• The Editor’s decision is final and binding on the entrants. No correspondence will be entered into.

FremantleMedia are delighted to announce that WWE Home Video UK titles will be available to download digitally for the very first time from today, Monday 25th March. The first wave of WWE releases will be […]

Win WWE SUMMERSLAM 2013 on DVD In Our Competition

**COMPETITION NOW CLOSED** The biggest event of the summer is here as the WWE Universe takes over the Staples Center in Los Angeles once again for the 26th annual SummerSlam! Can the underdog Daniel Bryan […]