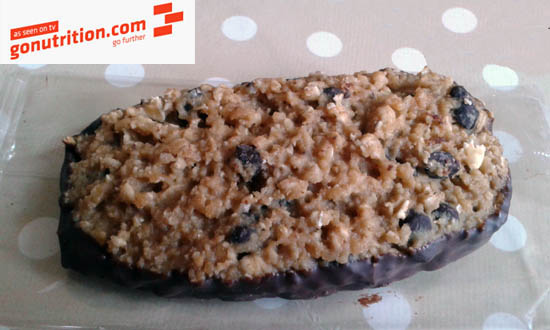 When I’ve been training, I’m usually on the rampage for snacks that evening or a few days after. Though I always try to eat as healthily as possible, it’s sometimes hard to resist those chocolate treats, especially when my body craves it so.

Fortunately, there’s a range of protein snacks out there that do just the trick in a much healthier way, and one of those is GoNutrition Original Protein Flapjacks.

With an impressive 18.6g of protein per slice, GoNutrition Original Protein Flapjacks provide a substantial hit of protein when you need it most, be it before, during training or post-training, to help repair and grow muscles, along with a carbohydrate boost for energy. To be honest, the flapjacks are a great snack to munch on at anytime of the day as a snack between meals.

Taking the GoNutrition Original Protein Flapjack out of its transparent wrapping, it’s clear to see what the protein snack is made from. Dark chocolate chips upon a bed of oats, sat upon a chocolate mount. Whilst it’s not the prettiest of flapjacks out there, it’s the taste that truly matters.

Taking a bite of the flapjack, I can instantly taste the ingredients. The baked flapjack is soft and chewy, but not overly so, just the right amount to allow one to savour the flavour. It also tastes a bit moist, allowing the flavour to seep through whilst keeping the flapjack together. There’s nothing worse than eating a snack which is dry as a bone. GoNutrition do not have this problem with the Protein Flapjack. It’s soft, chewy and tastes rather good! The chocolate base is delicious, as are the oats and choclate chips. There also seems a sweet yet subtle fruity flavour within, which I’m not sure of the origin or whether my mind is interpretating different flavours as being fruity, but either way, it’s a tasty addition to the snack.

Those particular ingredients listed in bold are ones to watch out for should you suffer from allergies.

The flapjacks really are a tasty treat and are a lot easier to chew than some other protein snacks I’ve had in the past, which is great as the last thing you want is jaw ache to get your hit of protein. The chocolate chips are a nice addition on top along with the chocolate base, providing a ‘sandwich’ of sorts, with the blended oats acting as the filler. The flapjack is also a decent size, neither too big nor too small, and fills an emptiness inside when waiting between meals or when you have that hunger pang for something sweet.

Half Price Supplement Bundles, Freebies and Discounts at Myprotein!

The only thing we love more than taking tasty, effective supplements is getting them at a cheap price! Well, it just so happens that Myprotein have some incredible discounts codes live at the moment that […]

Ever wondered what sports supplements to try out or get your hands on? British supplement brand and online store Bodybuilding Warehouse sell a wide range of supplements daily and it’s interesting to see what their […]

Get 10% off Quest Bars VALENTINES DAY ONLY at Predator Nutrition

Celebrate Valentine’s Day with 10% off QUEST bars from Predator Nutrition when you use voucher code PNVALENTINE at checkout. With free UK delivery over £20 and the ability to earn loyalty points on every […]