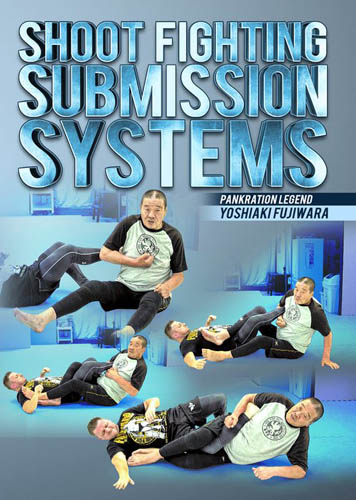 As a practitioner of Erik Paulson’s Combat Submission Wrestling in the home of catch-as-catch-can and pies (Wigan, Lancashire), catch wrestling is something that more than interests me. It’s part of my roots. Even my cousin’s grandfather was a catch-as-catch-can champion back in the 1920’s.

The main purveyors of catch wrestling in the latter half of the 20th century, that took Billy Riley’s Snake Pit style overseas to Japan and the USA, were Karl Gotch and Billy Robinson. Both trained catch to wrestlers in Japan that ended up competing in New Japan Pro Wrestling (NJPW) and Japanese UWF.

One of Karl Gotch’s students and an accomplished wrestler and wrestling coach is Yoshiaki Fujiwara, a man well-versed in the art of shoot wrestling and is known as a submission master.

What is Shoot Fighting?

To understand Shoot Fighting we must first look at its origins in Shoot Wrestling.

Shoot Wrestling is the employment of techniques that are legitimate, real-life techniques in their own right. In professional wrestling, the match we see is a work, meaning it is planned, scripted and pre-determined like a routine. In other words, you know what your opponent is going to do and your opponent is aware of your planned response. The techniques are not there to injure even if sometimes they accidentally do. Shoot wrestling, on the other hand, is the use of legitimate techniques or full contact techniques that have the potential to submit or harm an opponent. Many of these brutal grappling techniques were derived from catch wrestling, as taught by Karl Gotch and Billy Robinson.

One of Gotch’s students, Antonio Inoki, decided to pit catch’s strong style of wrestling against other martial arts styles to show how how effective shoot wrestling was. Another of Gotch’s students, Satoru Sayama (ringname Tiger Mask) masterminded his own mixed martial arts organisation called Shooto where participants would fight, many of which using the shoot wrestling style as well as Judo, Sambo and Muay Thai. This style of combat became known as Shoot Fighting although Shoot Wrestling is also used as an alternative term when referring to the submission wrestling side of it.

There’s a few video tutorials knocking around on the web featuring Fujiwara’s submission skills. One pf them that I’d love to get my hands on is Submission Master from Scientific Wrestling. There’s also a subtitled tutorial video called Karl Gotch’s Submission Wrestling by Yoshiaki Fujiwara from Japan Budo Videos. However, I recently opted with the Shoot Fighting Submission Systems digital download from BJJ Fanatics. A bonus for me is that I can download it as an MP4 which means I don’t have to be connected to the internet and have to stream it to view it – especially useful if you want to take a tablet to the dojo to watch and drill the techniques but your dojo has no internet connection.

The first video of the two-part Shoot Fighting Submission Systems by Yoshiaki Fujiwara comes in at around 36 minutes and details a variety of savage techniques from a standing head cranks to achilles lock and heel hook. There’s some beautiful techniques from kesa gatame (scarf hold) position, some of which I’ve covered in Erik Paulson’s CSW syllabus, but there was one that involved a sneaky wrist lock that was just too delicious I had to rewind and watch over and over.

Fujiwara showcases a bit of striking in this video too, including kicking at heels to move your opponent as well as more subtle ways to strike your enemy without the ref noticing. Naughty! Fujiwara also explains a few ways in how to protect yourself if you’re in four quarter position, turtled up, as well as what you would do if you came across an opponent effectively turtling up that you’d like to breakdown to get an entry in.

Whilst Fujiwara speaks in Japanese, there’s someone translating the techniques in English, providing commentary which appears to be almost verbatim. I’ve found this to be better than subtitles which other DVDs offer because you’ll find yourself missing out on the technique if you have to read the subtitles whilst watching. This particular translator seems to be in the room, sat behind the camera, which gives a better feel for the translations he offers.

An odd one or two title cards which display the technique appear at the wrong time, which may cause confusion initially, but the techniques that should have been present do appear later in the video. 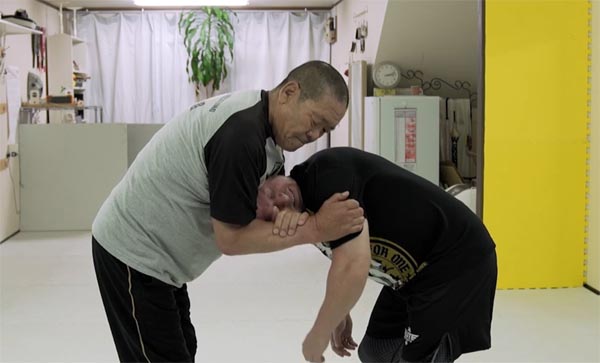 In the second video, which has a running time of 28 minutes, Fujiwara opens with a carotid artery choking technique with a towel before ploughing into armbars, baiting the triangle from a failed armbar, neck crank, counters to armbars, and wrist locks. Some of the techniques shown in the video you could use in a submission wrestling match whilst others would definitely only work in an MMA fight, or possible even street fight (finger peeling is one of them). I did see a mighty knee bar and toe hold combo that is too irresistible, I simple will have to try it out the next time I’m on the mat. And yes, Fujiwara also manages to squeeze in a clockhead scissors but for those unaware of the technique, he merely skims it as an impromptu extension to the technique he’s showing so he doesn’t explain the technique at all – just one for the eagle-eyed viewers, I’m afraid.

For what is essentially just over an hour’s worth of tutorial, I’m amazed by how much technique Fujiwara packs into the videos. A couple of the techniques he repeats but for the most part, it’s unique with snappy delivery. As Fujiwara wastes no time in showing an array of positions and submissions, this is definitely not a disc for the beginner. Not much time is spent explaining the technique in great detail but there’s enough details given for an experienced grappler to understand what is needed to achieve the success of the technique. So I’d say this is definitely for someone who’s intermediate or at least got a good knowledge of body mechanics and preferably experience in submission grappling. I have around 4-5 years experience in submission wrestling and I found Fujiwara’s tutorial easy to digest and understand enough to practice what’s shown in the video.

What is also clear from this tutorial is that Fujiwara is a very funny guy. He makes little jokes as he’s punishing his partner, their yelps and rapid tapping out sounding more like an applause to Fujiwara’s skills. However, he’s also a skilled and serious practitioner and explains that people who want to be good need to be training every day. These techniques work and there’s no “can’t do” – it’s just laziness. It seems that Fujiwara doesn’t have much time for people who aren’t prepared to work at something and get stuck in and isn’t impressed by the can’t do or give up mentality. He’s a very inspirational individual and great teacher who’s disciplined and makes you want to be your best, even just by sitting watching the technique. I always find the best teachers are the ones who are a bit forceful, who don’t mind pushing you in order to get the best out of yourself.

Although I’d have liked the videos to be longer to gain even more knowledge from Fujiwara, this two-part video fits loads into its short running time and I’ve gained a few new techniques from it that I can certainly use in training. Here’s hoping Fujiwara returns in the near future with even more Shoot Wrestling submission goodness.

Shoot Fighting Submission Systems by Yoshiaki Fujiwara is available as a digital download from BJJ Fanatics. If you use my referral link, you can get a $20 coupon to spend on the store. This may only be applicable to new customers to BJJ Fanatics.

On Friday 2nd November 2018, The Snake Pit in Wigan celebrated the 70 year anniversary of the catch wrestling club started by Billy Riley which is currently run by former student Roy Wood and his […]

PHYSICAL CHESS: My Life in Catch-As-Catch-Can Wrestling by Billy Robinson & Jake Shannon Available from Book Depository To catch wrestling fans around the globe, Billy Robinson was one of the wrestling Gods, sitting alongside Karl […]