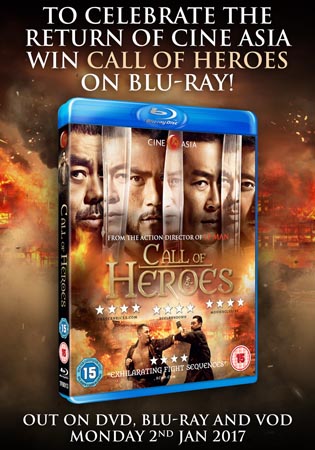 To celebrate Cine Asia’s grand return with CALL OF HEROES – Available from Monday 2nd January 2017 on DVD, Blu-Ray and VOD, we have a Blu-Ray copy to give away courtesy of Cine Asia.

Call of Heroes thrills throughout in its tale of skilled martial artists, who take a stand to protect their village against a ruthless army. In 1914, after the collapse of China’s Qing dynasty, Yang Kenan (Sean Lau, Mad Detective) is appointed as guardian to defend the rural village of Pucheng. After Yang arrests the son of a sadistic warlord, Cao Shaolun (Louis Koo, Flash Point), the warlord’s army threatens to bring death and destruction. As the odds for peace lessen and the pressure mounts for Yang to release the murderous captive, a stirring tale of heroic resistance unfolds.

For your chance to win a copy of CALL OF HEROES, simply Follow and Retweet the following tweet:

Follow and Retweet for your chance to win action epic CALL OF HEROES on Blu-Ray in our #competition https://t.co/Lf2TNWFn8T pic.twitter.com/lzbwjUvwGC

The competition will close at 11.59pm GMT on Sunday 8th January 2017 and one valid entry will be chosen and notified via Twitter.

T&C’s
• This promotion is open to UK residents only.
• Entrants must be aged 15 years or older
• One entry per household
• There is no cash alternative to Prizes which are subject to availability, non-transferable, non-negotiable and non-refundable. Prizes may not be sold, offered for sale or used in connection with any other competition or promotion by the Prize winner
• 1 winner will win 1x Blu-Ray of Call of Heroes.
• The Editor’s decision is final and binding on the entrants. No correspondence will be entered into.

Win THE RAID 2 Merchandise In Our Competition!

THE RAID 2 brings all out action to the streets of Jakarta with fast paced, relentless action and a labyrinthine story of dark thrills that demands to be watched time and again. Introducing new kick […]

To celebrate the release of the action packed Police Story: Lockdown – for download from Monday 18th July 2016 and On DVD & Blu-Ray from Monday 25th July 2016 – we have teamed up with […]