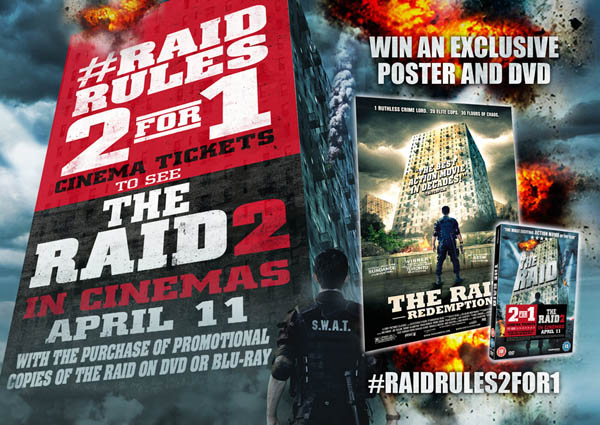 Due to the hotly anticipated arrival of The Raid 2 in cinemas on April 11th, Entertainment One UK have re-released The Raid on DVD and Blu-ray with a special Cineworld 2 for 1 ticket offer.

Don’t miss your chance to pick up this action packed classic, it’s guaranteed to set your heart racing with its stunning visuals and martial arts mastery.

Take advantage of the #RaidRules2For1, grab your specially marked promotional copies of THE RAID in store now, while stocks last! Be a part of our exclusive tweet-a-long on April 10th at 9pm in preparation for the arrival of THE RAID 2 in cinemas April 11th!

There are no excuses not to be part of The Raid phenomena in 2014!

To celebrate the re-release of The Raid, we have a fantastic competition that you simply can’t afford to miss out on. Not only do we have a DVD (with 2for1 offer), we also have a exclusive quad poster to give away.

Simply like our Facebook page using the form below to be entered into the competition. You can also gain two bonus entries if you’re a Twitter user.

• This promotion is open to UK residents only.
• Entrants must be 18 years or over
• There is no cash or other alternative to the prize stated and the prize is not transferable and no part or parts of the prize may be substituted for other benefits, items or additions.
• 1 winner will win 1x The Raid DVD and Poster
• The Editor’s decision is final and binding on the entrants. No correspondence will be entered into

**COMPETITION NOW CLOSED** Win a Limited Edition MONSTER BRAWL T-Shirt (Size Large) and Poster in our competition. Eight classic monsters fight to the death in an explosive wrestling tournament set inside an abandoned and cursed […]