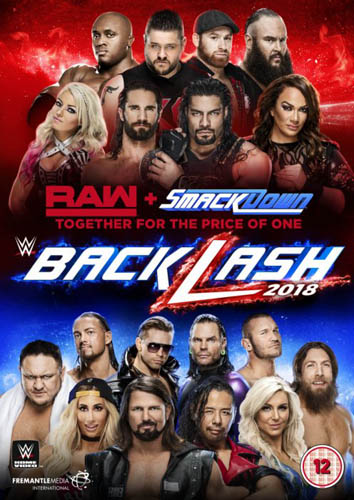 It’s WWE’s first major pay-per-view event since WrestleMania 34, with over 3 hours of sensational action from the Superstars of Raw and SmackDown LIVE! AJ Styles defends the WWE Championship against Shinsuke Nakamura in a brutal no disqualification match, and Roman Reigns tries to reassert his dominance when he collides with Samoa Joe!

Not only the first major WWE show since WrestleMania 34 – resetting the action and drama for the “post-Mania season” – Backlash is also the start of a new era, with both Raw and SmackDown Superstars now on every PPV card, making Backlash an event that’s absolutely stacked with huge matchups from both brands!

Roman Reigns and Samoa Joe decimate each other in a hard-hitting powerhouse match. Seth Rollins and The Miz put on a breakneck wrestling clinic. AJ Styles and Shinsuke Nakamura prove the depths they’re willing to got to be WWE Champion. And Carmella shocks the WWE Universe with her devious tactics against Charlotte Flair!

With so much at stake and the landscape changing after the Raw and SmackDown “Superstar Shake-Up”, the stakes were as high as ever at Backlash – an exciting follow-up to one of the greatest WrestleManias of all time!

Feuds and scores are settled and careers hang in the balance at the 3rd annual Payback event, WWE PAYBACK 2015, coming to DVD and Blu-Ray in the UK on 13th July 2015. Match ups include […]

WWE THE BEST OF IN YOUR HOUSE Available Now and WCW WAR GAMES Available for Pre-Order at WWEDVD.co.uk

WWE The Best Of In Your House has finally arrived in the UK. This 3-disc DVD/2-disc Blu-ray set encompasses some of the best matches that took place on In Your House events between 1995 and […]