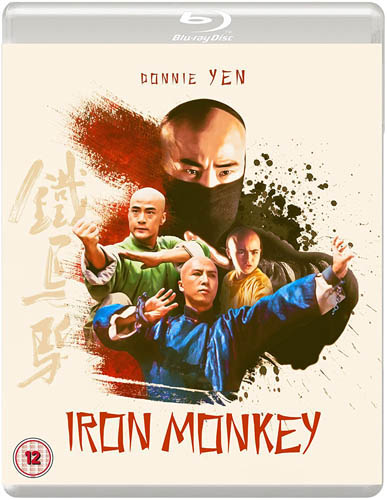 A Robin Hood-style hero named Iron Monkey robs from the rich and corrupt to feed the poor and needy, much to the anger of the town’s governor. Ordering his security, led by General Fox, to capture anyone suspected of having a connection to the mysterious, masked Iron Monkey, Governor Cheng Pak-Fong wrongly imprisons physician and Shaolin disciple Wong Kei-Ying and his son Wong Fei-Hong. The only way they can clear their name and earn their freedom is if Wong Kei-Ying can capture and bring the real Iron Monkey to him. With seven days to capture the elusive Iron Monkey, Wong Kei-Ying must use his cunning to root him out of hiding. However, when brutal investigator Hin Hung visits the town, Kei-Ying realises who the true threat really is and must work with Iron Monkey to save the town and its people.

Embracing wire-work with a blend of Kung Fu, this outstanding action movie puts an Asian spin on the Robin Hood and Zorro-esque tale with Rongguang Yu starring as the masked hero. By day, he blends into village life as Dr Yang and is assisted by Miss Orchid, his student in both medicine and combat. However, his actions seem to have put the freedom and life of young boy Wong Fei-Hong in jeopardy and his father Wong Kei-Ying rightly wants to do whatever is necessary to free his son, even if that means bringing people’s hero Iron Monkey to the Governor’s table. Dr Yang knows he must protect his alter ego if the poor, orphans and plague-stricken victims are to survive and so must tread a fine line in order to keep his identity a secret.

A period martial arts film that rarely comes up for air, IRON MONKEY keeps you hooked as it blends its moral tale with kick-ass martial arts and a healthy dose of slapstick comedy and humour thrown in for good measure. With a hero we can get behind, Iron Monkey’s high flying acrobats and razor-sharp skills makes him such a difficult target to pin down much like the other heroes in the good vs wicked genre. Like all movies of this kind, our hero has a target on his back and this time it’s from a kindred spirit who is seemingly forced into the hunt of Iron Monkey in order to save his own. However, new arrival Wong Kei-Ying is more than just a rival in medicine and has the hand-to-hand combat skills to match Iron Monkey. Even Kei-Ying’s son Fei-Hong is skilled in the art of Kung Fu and is keen to grow both as a person and as a martial artist and shows both shades of his father and Iron Monkey in his personality, something we see develop over the course of the movie.

Evolving from the Shaw Brothers style of Kung Fu movies, IRON MONKEY has a touch of floatiness about it with the titular hero often seen jumping gracefully from roof to roof to defend himself and dispatch any of the enemies he encounters. I’m not usually a fan of wire work in martial arts movies but in this movie it’s used quite tastefully. In the special features, Donnie Yen, who stars as Wong Kei-Ying, talks about how he tries not to use wirework if possible and knows that the script or storytelling should require its use. In this outing, the wire seems more than justified as the story transmits more as a fable or old folk tale rather than a matter-of-fact reconstruction. Rather than having characters fly through a forest a la Crouching Tiger, IRON MONKEY‘s wirework serves to exaggerate certain movements for maximum thrill and effect without going overboard. Granted there are some scenes later on in the movie where liberties with gravity, athleticism, balance and acrobatic strength are well and truly taken but for the most part it serves to benefit the storyline without causing too much of a stir. Where else can you see bowls of food, sacks of grain and other such parcels and pottery fly across the room with such elegance? And if it’s not bowls, it’s usually human bodies crashing through wooden posts or through walls, albeit more exaggerated than reality would depict it. The additional “thump” sound effects also add to this caricaturish depiction of reality but where Yuen Woo-Ping could have certainly run away with himself, I feel this is a far more restrained effort than what I’ve seen in Asian cinema.

There’s some fantastic set-piece scenes in this movie; one of which that comes directly to mind stars young Wong Fei-Hong (an extremely talented Sze-Man Tsang who was cast as a boy) battling against a bunch of slavers who’ve been abusing the orphans and street kids. The environments are used well with tables, pots and all manner of furniture used to caused damage, spring off of and generally enhance the visuals of a fight, something which isn’t uncommon in the likes of Jackie Chan films. This plays into the film’s comedy element with some characters providing comic relief too, particularly General Fox and, when not being outright obnoxious, Governor Cheng Pak-Fong who is only just keeping his head above water with his eight wives. The kung fu in the film though is top notch and exciting to boot, presenting punches and kicks with flair that will have every action fan on the edge of their seat, diving into their popcorn. It’s fun, thrilling and fast with never a dull moment to witness. Even the scenes of drama in between have something to offer with Donnie Yen and Rongguang Yu full of positive attitude and conviction in their cause as their respective characters, something which comes in use against the corrupt government in the latter half of the movie.

Eureka Entertainment have given the 1993 movie the Blu-Ray treatment and boy does it look stunning! Presented in 5.1 audio with optional 2.0 stereo sound, you can choose from Cantonese dialogue with English subtitles or English dubbing. As a purist, I always prefer to watch with the original language track. The visuals are clear, colourful and crisp whilst the disc itself is loaded with special features including interviews with the cast and crew, a shadow boxing video and even footage from a 2003 Wushu championships in which two of the film’s stars perform a weapons kata.

With its use of hand-to-hand combat and weapons, IRON MONKEY has all you could desire from a kung fu film. A mesmerising spectacle of martial arts prowess, IRON MONKEY deserves to take pride of place on any period action film lovers’ movie shelf.

AMERICAN SHAOLIN (1991) aka NO RETREAT, NO SURRENDER 5 Directed by Lucas Lowe Written by Keith W. Strandberg After being beaten and humiliated in a karate tournament against dirty kickboxer Trevor Gottitall (what a name!), […]