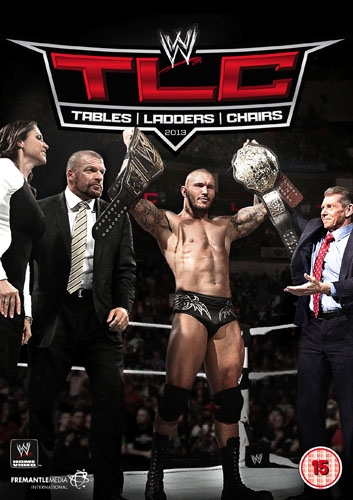 The WWE final PPV event of 2013 proves to be an important one, with the very first WWE World Heavyweight Champion to be crowned, merging the WWE Champion and World Heavyweight Champion belts. The holders of these two belts are the viper, Randy Orton, and John Cena respectively. For the main event, the two are to go head-to-head in fan favourite, Tables, Ladders and Chairs match. Welcome to WWE TLC – Tables, Ladders and Chairs 2013.

Hosted at Houston, Texas, Stephanie McMahon and Triple H announce to the audience at the Texan arena about the history-making match that will be headlining the card. Following the announcement, the viewers attention is quickly shifted onto the first match: a 3-on-1 handicap match between CM Punk and all three members of The Shield. It’s obvious that CM Punk has an uphill battle, but it’s be stupid to call it without watching. Dean Ambrose is the first to face CM Punk and as soon as the match starts, the two wrestlers clinch. CM Punk gives as good as he’s got against Dean Ambrose and the two have a pretty equal fight until Seth Rollins enters the ring after Dean makes a tag. CM Punk executes a string of neck breakers on the wrestler before Rollins turns it onto Punk later. Where the real challenge is for CM Punk is Roman Reigns and his killer spear attack. Fortunately for CM Punk, Punk’s reflexes have become sharper since the last time they met and he dodges a spear that sees Roman Reigns fly over the announcer’s table. For one wrestler against three others, CM Punk does a marvellous job, subsequently unleashing a whirlwind of techniques on the weakest link of The Shield, Seth Rollins, as well as dodging another spear by Reigns which catches his own teammate Dean Ambrose. The crowds have a lot of love for CM Punk but is it enough to see him through to victory?

We couldn’t have a night without having some Diva action and we get just that early on in the night with title holder AJ Lee taking on the recently returned Natalya in the WWE Divas Championship match. I’ve never seen Natalya wrestle before but it’s not long before it’s obvious how acrobatic and powerful she is, effortlessly executing perfect suplexes on AJ Lee. It appears AJ Lee struggles with the powerful presence of Natalya and uses to her advantage the distractions that her ringside protector, Tomina Snuka, provides during the match. Is AJ Lee’s springy, skipping presence enough to avoid Natalya’s sharpshooters? And can Natalya use her strength to prevent AJ Lee’s popular moves of the body triangle and black widow? The intense, action-packed match will keep viewers glued to the screen.

After a breathtaking couple of fights, the pace slows down when WWE Intercontinental Championship title holder Big E. Langston takes on self-proclaimed ‘Intellectual Saviour of the Masses’ Damien Sandow. Big E. towers above Damien Sandow and is twice as broad, proving an immovable force against Sandow’s tactics. Whilst Sandow clotheslines Big E. and even performs the Elbow of Disdain, it can’t really compete with the massive punches from Big E. It turns out a bit of a thundering match compared to the others.

Looking to bring the action and intensity back, a Fatal 4-Way Elimination Match is set for the WWE Tag Team Championship belts. Taking part are brothers Cody Rhodes and Goldust; Big Show and Rey Mysterio; Ryback and Curtis Axel; and The Real Americans (Jack Swagger and Antonio Cesaro). I love a good tag team match and pitting 4 teams against each other works a treat. Ryback and Cody Rhodes are the first to take centre ring and get straight into the action. The Superstars don’t mess around though, and continue the flow of the match by tagging other members surrounding the ring. Soon enough, Ryback’s teammate Curtis Axel finds himself pitted against the towering Big Show, who pleases the audience with his infamous slaps which can be clearly heard in the arena. Even Big Show’s tag team partner, the pint-sized Rey Mysterio summons the crowds to quiet down so they can all listen. Big Show dutifully waits until the audience can hear the hard as hell slaps as clear as they can be. Rey Mysterio gets his moment to shine too as he and Axle collide. Nothing beats watching the high-flying Mysterio do his 619’s on people and do his acrobatic moves. Standing at the sidelines are The Real Americans, letting the other wrestlers get tired and having one tag team defeated before they join the action. Jack Swagger takes on Big Show who takes pride in throwing him over a barricade. Though Big Show doesn’t have it all his way as Cody Rhodes slams him into the ring post. With so much talent on display, it’s gonna be a close call who’ll clinch it.

Like every good rollercoaster, what goes up must come down, and that down is the next three matches. R Truth takes on Brodus Clay in a short match that sees Brodus arguing more with his tag team partner Tensai than actually wrestling with R Truth.

A No Disqualification Match is quickly set up on the night between Kofi Kingston and The Miz after The Miz is heard disrespecting Kingston on the live panel with Mick Foley and Booker T. Kofi injures himself halfway through the match by missing The Miz and kicking the ring post by accident. The Miz takes advantage by knocking him about and groin splits him on the barricade. There’s not enough barricade action in these fights, so glad to see they’re being used a bit more! The Miz even turns dirty by exposing a turnbuckle when he doesn’t need to, an idea that may or may not bite him in the ass later.

We eventually come to Bray Wyatt and his ‘family’ who are convinced on claiming the goatman Daniel Bryan as their own, but Bryan is prepared to take all three in a 3-on-1 Handicap match. Bray lets his henchmen Luke and Erick do the dirty work before entering the ring himself, throwing Daniel Bryan on the floor and doing some crazy Exorcist-style spider walk towards him. The crowd cheer Bryan on, with shouts of “YES! YES! YES!” as Daniel Bryan lays series of kicks into his cultist opponents. Bryan also makes use of the announcer’s table and steel ring steps to prevent the Wyatt family from getting their clutches on him. However, in all honesty, the Wyatt family prove to a boring foe for the charismatic Bryan.

After a slow-burning run up, the finale arrives as Randy Orton takes on John Cena in a Tables, Ladders and Chairs match for the newly created WWE World Heavyweight Championship belt. Each of the two wrestlers gives up their respective belt and the two belts, the WWE Champion and World Heavyweight Champion belts, are dangled high above them. The wrestler who climbs a ladder and retrieves the belts first goes down into the history books. Neither Orton or Cena are prepared to lose and with Randy Orton never before taking part in a TLC match, Cena is at a distinct advantage.  The pair pair get straight into the clinch before John Cena performs the first takedown before eventually smacking him with a ladder and preparing a table for even more action. Randy Orton doesn’t seem one to take things lying down and retaliates with a chair, then mocks Cena’s ‘you can’t see me’ routine. Trying to attack John Cena again, Randy Orton misses and Cena counters and uses the chair on Orton instead. There’s lots of attempts from early on in the match to acquire the belts but each wrestler is determined to not let the other win. The fight even goes outside the ring, through the  Spanish announcer’s table,  and with some help from the steel ring steps and a microphone. In fact, obscure objects play a key role within the 30 minute match, as a pair of handcuffs are found stashed under part of the ring.

Whilst there’s plenty of action in the main event, it does seem to be a rehash of others, and brings nothing new, but then again, John Cena never really changes his tactics. He still, at the beginning of a main card fight, does his unsure, lost sheep impression, looking around the crowds, instead of engaging with his opponent from the get-go. The introduction of the handcuffs does make it more interesting, but I thought the fight would have used the ladders, tables and chairs a whole lot more effectively than they did.

There’s plenty of top notch action to enjoy from this event, but it suffers from some weaker material too. This is one for the die-hard WWE fans, particularly for the landmark championship event.

Feuds and scores are settled and careers hang in the balance at the 3rd annual Payback event, WWE PAYBACK 2015, coming to DVD and Blu-Ray in the UK on 13th July 2015. Match ups include […]

WWE BACKLASH 2018 is heading to DVD in the UK on 23rd July 2018. It’s WWE’s first major pay-per-view event since WrestleMania 34, with over 3 hours of sensational action from the Superstars of Raw […]