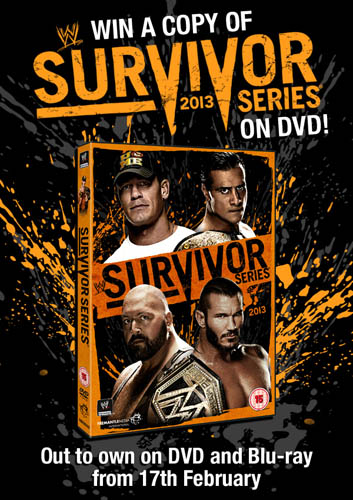 SURVIVOR SERIES also saw the long awaited return of the high flying former WWE Champion Rey Mysterio as he teamed with The Usos and WWE Tag Team Champions The Rhodes Brothers against The Shield and The Real Americans. The Beard and The Best, Daniel Bryan and CM Punk also teamed up to take on the Wyatt Family, and AJ Lee led a team of WWE Divas in a 7 on 7 Survivor Series Elimination match against the cast of Total Divas.

To celebrate the release of Survivor Series 2013 (coming to DVD and Blu-ray on 17th February) and courtesy of FremantleMedia International, we have a copy to give away on DVD!

For your chance to win a copy of WWE Survivor Series 2013 on DVD, answer the following question correctly:

To enter, just send your answer along with your name and address to contact@shop4martialarts.co.uk with the subject ‘Survivor Series 2013 Competition‘.

The competition will close at 11.59pm GMT on Wednesday 5th March 2014 and one winner will be picked at random from the correct entries.

T&C’s
• This promotion is open to UK residents only.
• Entrants must be 15 years or over
• One entry per household
• There is no cash or other alternative to the prize stated and the prize is not transferable and no part or parts of the prize may be substituted for other benefits, items or additions.
• 1 winner will win 1x WWE Survivor Series 2013 on DVD
• The Editor’s decision is final and binding on the entrants. No correspondence will be entered into.

Win WWE ROYAL RUMBLE 2013 on DVD In Our Awesome Competition!

**competition now closed** WWE kicks off The Road to WrestleMania and in 2013…Finally!…The Rock has come back to the Royal Rumble! Will the People’s Champ finally bring the WWE Championship home to Team Bring It […]

To celebrate Cine Asia’s grand return with CALL OF HEROES – Available from Monday 2nd January 2017 on DVD, Blu-Ray and VOD, we have a Blu-Ray copy to give away courtesy of Cine Asia. Synopsis: […]