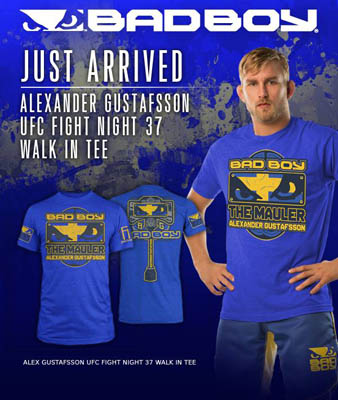 Alexander ‘The Mauler’ Gustafsson defeated Jimi ‘Poster Boy’ Manuwa on Manuwa’s home turf of London last night at UFC Fight Night 37, in the second round with a whopping knee to the head followed by uppercuts before raining punches on his downed opponent. The referee stopped the match and declared Gustafsson the winner by TKO.

Gustafsson is now the No1 title contender and will be fighting the winner of Jon Jones vs Glover Teixeira. Gustafsson previously missed out on a win against title holder Jon Jones after a close fought fight went to the judges scorecard. Gustafsson will look to settle the score with Jones, should he retain the title with Teixeira, otherwise he’ll be fighting the newly crowned champion.

MMA Warehouse are rewarding fans of Cain Velasquez by giving away a free Affliction Team Velasquez bandana with every purchase of a Cain Velasquez UFC 166 official walkout t-shirt from their website. Be it ladies […]

BAD BOY Green Walk In T-Shirt Only £9.99 THIS WEEKEND ONLY at DeepBlue Fightwear