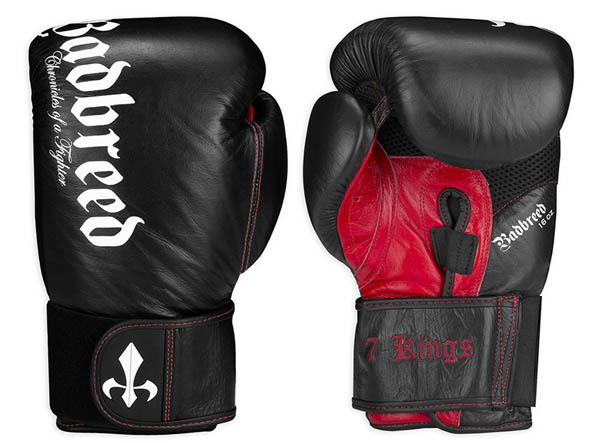 Whether it’s boxing, Muay Thai or MMA padwork, boxing gloves are a key piece of equipment to help protect the user’s hands when striking, as well as the opponent from receiving a black eye or worse!

I like to wear boxing gloves when working on the punch bag and using thai pads or focus pads with a training partner. I also love to get fully kitted up with shin guards and gum shield and have a sparring session with fellow class mates. Having used a variety of gloves in different weights from a range of fightwear brands, I know which boxing gloves suit my needs and which don’t.

The Badbreed 7 Kings Pro Black Boxing Gloves are a premium pair of gloves from Badbreed’s latest fightwear and equipment range, which was revealed at the end of 2013. Badbreed have revamped their style and with it, they have released an extraordinary selection of martial arts gear which improve upon their previous designs both in quality and design.

Straight out of the zipped net storage bag, the Badbreed 7 Kings Pro Black Boxing Gloves are a thing of beauty to behold. Handcrafted from 100% buffalo leather, the 12oz boxing gloves scream premium quality. I don’t believe I’ve ever seen a nicer pair of boxing gloves in my entire life. They look too nice to actually wear. From the smooth outer leather, to the Badbreed script print, red leather half palm and embossed rubber fleur de lis design, these gloves are made to make an impression in the ring or the gym.

Being such a stunning pair of gloves aesthetically, I wondered if the practical quality of the glove matched the quality of its exterior design. Well, I’m pleased to say they perform and fit as well as they look. 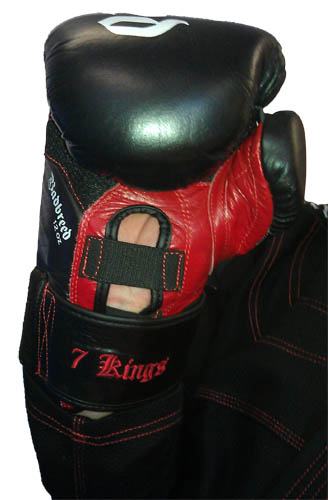 Featuring an attached breathable thumb, the gloves are double stitched in red thread at prone stress points including the opening slit, the back of the thumb where the leather connects and the inner curvature of the hand. The velcro wrist strap is also reinforced stitched in a criss-cross pattern to prevent the strap from tearing at the base. The wrist strap is also hemmed and stitched to give a clean and smooth finish to the glove which nicely fits in the the hemmed opening slit that itself is helped to keep tight using elasticated fabric.

We all know how sweaty gloves can get when boxing, so Badbreed have made the majority of the inner fingers from a durable and soft mesh, with generous sized holes allowing for the hand to breathe whilst the glove is in use. This aspect is a great addition to the glove as it helps to keep the hand cool which, in turn, allows you to perform at your best.

You need not be concerned of your hand swimming around in the Badbreed 7 Kings Pro Black Boxing Gloves as these are snuggest fitting gloves I’ve ever had the pleasure of wearing. A soft lining and padded interior allows enough room to ease your hand into the glove, but once it’s in, you’ll find that the glove is an extention of you hand as the gloves fit so close and natural. They’re not tight or restrictive at all, but instead are comfortable and allow the boxer’s hands to fit and sit in the right position inside, meaning less chance of injury to the hand when striking. 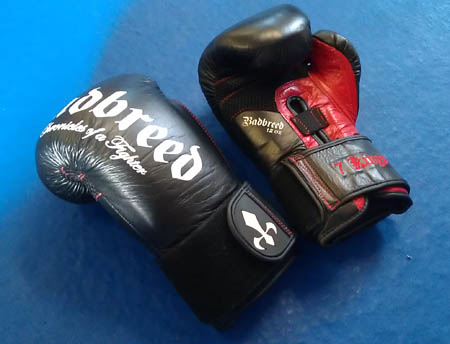 As far as design goes, I don’t think Badbreed could have made a better pair of gloves. The use of three colours: black, white and red, allows for the design to stand out in such a clean and striking way (pardon the pun). There’s no jazzy, over-the-top designs here. Instead, the gloves feature white Badbreed Chronicles of a Fighter script and a fleur de lis, both of which are used throughout the latest Badbreed range. The name of this particular model of boxing gloves, 7 Kings, is subtly embroidered in red thread on the velcro wrist strap and compliments the glove well, nicely tying in with the red stitching and red leather half-section of the palm. 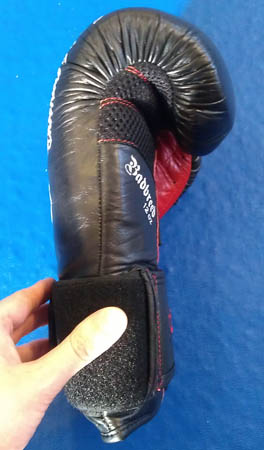 One of the most fascinating parts of the glove is the fastener system. I’m use to a single velcro strap wrapping around the wrist, but instead, the Badbreed 7 Kings gloves feature two velcro wrist straps, along with an elasticated strip of material to ensure the glove opening remains relatively tight. One of the straps is used to tighten and loosen the wrist gap to allow the hand to slide in and out of the glove, whilst the second longer wrist strap is used fasten the glove tight on the wrist as a whole. Both fasteners make use of velcro, whilst the shorter of the two straps features velcro on both sides, allowing for the longer strap to be fastened over the top. The wrist strap is nicely finished in the super soft and stylish embossed rubber fleur de lis.

These Badbreed 7 Kings Pro Boxing Gloves are simply the perfect choice for boxing in competition, sparring and bag or pad work. The durable construction and snug fit are second to none, and the amount of padding and support is very impressive. A whopping 1 inch thickness of padding can be found at the wrist which gives unparalled support for the back of the wrist when striking. I’ve never seen anything like this from a glove before and it is a welcomed addition, especially as I find my wrists to sometimes suffer from strikes. The fingers themselves are protected by 1.25 inches of padding, which gradually decreases to around 1 inch and is plenty padded enough to prevent injury to the fingers and knuckles.

Due to the close fit and extra padding to the wrist, I felt I could unload more during sparring and bag work. The boxing gloves feel more like an extension of your own hands or a direct replacement rather than wearing something. The super soft lining is comfortable against the skin during training, even after a long session. In my experience, these gloves have allowed me to react and punch quicker and more accurately due to the snug fit, compared to other gloves that aren’t as snug which can feel a little slippery. 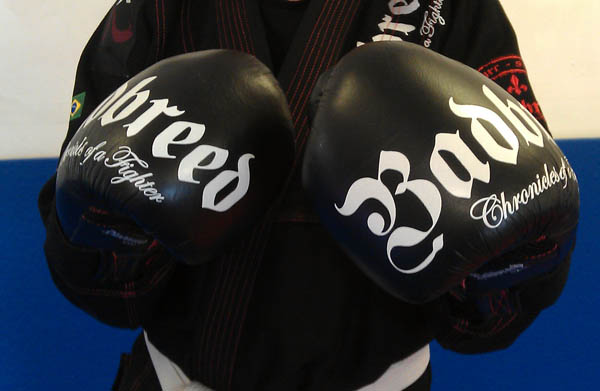 The old saying “you get what you pay for” couldn’t be truer. These 12oz boxing gloves are worth their weight in gold and are very justifiable for the price. At £69.99, the Badbreed 7 Kings Pro Boxing Gloves will do everything you require of them, and look the part at the same time. A stunning pair of gloves that once you’ve used them, you’ll wonder what you ever did without them.

Yesterday, Thai boxing equipment supplier Sandee announced they’ll be releasing a Joanne Calderwood signature series to coincide with her appearance on the UFC’s The Ultimate Fighter season 20, which will feature on all-female lineup of […]

Boxing gloves are a core piece of equipment for any keen martial artist and fitness enthusiast. From boxing to Muay Thai, Mixed Martial Arts to K1 kick boxing, boxing gloves can be used in a […]

If you’re looking for a new BJJ gi on a budget, then our handy list of adult BJJ Gis for sale under £60 should help you to find a gi that suits you and your […]