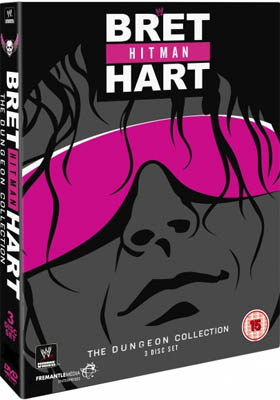 WWEDVD are delighted to announce that you can now pre-order BRET “HIT MAN” HART: THE DUNGEON COLLECTION on DVD and Blu-ray (Release Date: 13th May 2013)

For nearly 30 years, Bret “Hit Man” Hart travelled the glode proving he was “The Best There Is, The Best There Was, and the Best There Ever Will Be”. In The Dungeon Collection, the Hit Man himself compiles his best never-before-released on DVD matches and takes you behind the scenes in a brand new, revealing interview detailing the inside stories surrounding these rare matches.

With over 8 hours of in-ring action, including classics from the Stampede Wrestling Vault as well as vintage WWE bouts against the top stars of the 80’s and 90’s, this is a must for all Bret Hart fans.

Pre-order your copy now at WWEdvd.co.uk

Up to 40% Off Hoodies, Sweatpants, Flannels and Long Sleeve Tees at WWEShop.com

It’s getting a bit nippy out there and even I have put on my long sleeved tees underneath a hoodie due to the onset of the cold weather. If you’re a fan of WWE, why […]

DVD Exclusive Sale! Get Select DVDs & Blu-Rays for $5.99 when you use coupon code WWEDVDS at WWEShop.com! This special offer ends on 18th October 2013. The special offer titles include WWE The Attitude Era, […]