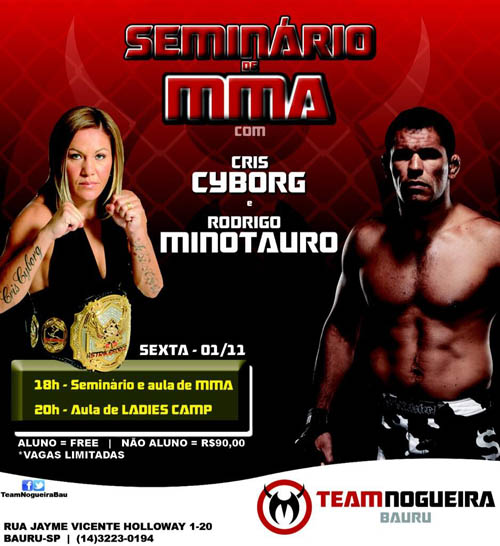 Both Brazilian born fighters, Rodrigo Nogueira and Cris Cyborg gave an MMA masterclass to the students of the club with a ladies only camp later in the evening.

Rodrigo Antônio Nogueira, also known as Minotauro, is a former Pride fighter and has a record of 34 wins, 8 losses and 1 draw (with 1 no contest). A fourth degree black belt in BJJ and black belt in Judo, Rodrigo currently fights at heavyweight in the UFC, with his twin brother Rogerio in the light-heavyweight division.

Join Cris Cyborg for an MMA lesson at her new gym, Academia The Rock, in Curitiba, Brazil. The Shop4 Martial Arts sponsored gym will be hosting a meet, greet and lesson with Cris at 7.30pm […]

At a press conference yesterday in California, Cris Cyborg’s fight manager Tito Ortiz revealed that Cris has been released from Zuffa and has signed a 3 fight deal with Janet Martin and Shannon Knapp’s successful […]