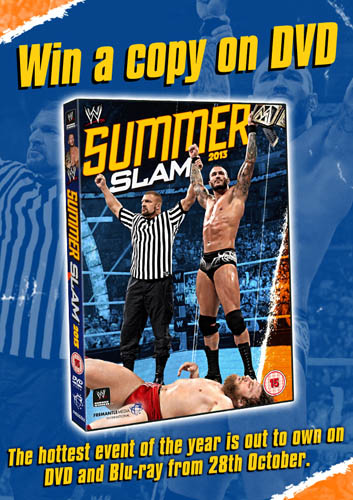 The biggest event of the summer is here as the WWE Universe takes over the Staples Center in Los Angeles once again for the 26th annual SummerSlam! Can the underdog Daniel Bryan dethrone 11 time WWE Champion John Cena and win his first ever WWE Championship? Paul Heyman guys, CM Punk and Brock Lesnar collide as The Best takes on The Beast! After suffering several attacks at the hands of the menacing Wyatt family The Devil’s Favorite Demon, Kane, has his chance to get even as he takes on Bray Wyatt in the menacing Ring of Fire match!

For your chance to win a copy of WWE SummerSlam 2013 on DVD, answer the following question correctly:

Which wrestler fought against John Cena in WWE Summerslam 2013?

To enter, just send your answer along with your name and address to contact@shop4martialarts.co.uk with the subject ‘Summerslam 2013 Competition‘.

The competition will close at 11.59pm GMT on Wednesday 13th November 2013 and one winner will be picked at random from the correct entries.

T&C’s
• This promotion is open to UK residents only.
• Entrants must be 15 years or over
• One entry per household
• There is no cash or other alternative to the prize stated and the prize is not transferable and no part or parts of the prize may be substituted for other benefits, items or additions.
• 1 winner will win 1x WWE Summerslam 2013 on DVD
• The Editor’s decision is final and binding on the entrants. No correspondence will be entered into.