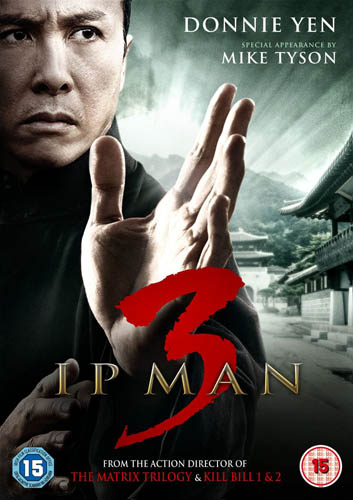 Wing Chun master Ip Man is forced to keep watch over the local school after thugs threaten and beat up the headteacher for refusing to sign over the school to them and their property developer boss. Meanwhile, rickshaw driver and part-time street fighter Cheung Tin-chi yearns believes his Wing Chun skills to be better than Ip Man’s and goes out of his way to prove to the city that his Wing Chun style is superior.

Inspired by the real-life Wing Chun master who famously taught Bruce Lee, Chinese martial arts film sequel IP MAN 3 is an action-packed martial arts drama that manages to convey the importance of living life to the fullest with the ones you love and showing respect to those around you. Though that message is loud and clear with more than its fair share of emotional moments, the film doesn’t shy away from putting on a fine display of martial arts with Donnie Yen facing a range of enemies once again as Ip Man. This time he is also joined by Jin Zhang as Cheung Tin-chi who’s Wing Chun style differs to the calm, traditional approach of Ip Man’s. Cheung’s style of combat is hard and fast, not as graceful as Ip Man’s. You can see the street fighter influence when Cheung fights which makes for a very exciting watch and contrasts Ip Man’s style tremendously well. Though the two collaborate, they are cast as respectful enemies and it wouldn’t be a martial arts film if these two didn’t fight one another at some point. We are justly rewarded though with an epic fight scene as the two face off towards the end of the film to prove who’s Wing Chun is superior complimented by the inclusion of bo staff and butterfly swords.

Hand-to-hand combat is where IP MAN 3 comes into its own though. Donnie Yen tackling a horde of goons is always entertaining and with the setting of a boatyard and school, there’s plenty of opportunity to use the environment. Other martial arts styles are brought into the mix too such as Muay Thai when a skilled thaiboxer is ordered to maim Ip Man for helping to prevent the takeover of the school. Taking place in a lift and stairwell of an apartment building, the fight scene is intense with both fighters giving it all. In a later scene, we’re also treated to  a Wing Chun vs Boxing fight with Donnie Yen facing non other than Iron Mike Tyson. At first Mike’s presence feels awkwardly inserted into the film but there’s no denying that when these two fight it’s a tremendous scene to behold. Bobbing and weaving and with such powerful strikes, Tyson is an intimidating menace of a character both in size and pure power. If Ip Man wants to be left alone, he must last three minutes against Tyson’s no-nonsense property developer.

Though there are a few physical exaggerations, wirework seems to be left to a minimum in IP MAN 3 which is quite a relief as I prefer my martial arts movies to have a sense of realism. There’s plenty of action to balance out the touching story and as a film to be enjoyed by all audiences, not just martial artists, I think it works incredibly well. For a film based on a man who many have come to know as the teacher of one of the greatest martial artists the world has ever seen, it’s fitting that the character of Bruce Lee makes a couple of minor appearances in the film, one being a particular nod to his roots in ballroom dancing.

IP MAN 3 is a stunning piece of cinema that beautifully concludes the Ip Man trilogy. Martial arts film fans will not be disappointed.

Win SHAWN MICHAELS MR WRESTLEMANIA on DVD In Our Competition!

COMPETITION NOW CLOSED! Shawn Michaels and WWE’s biggest annual event go hand-in-hand. He’s been involved in so many memorable matches and now is your chance to relive these classics along with comments from the man […]

POLICE STORY: LOCKDOWN Available now on DVD and Blu-Ray in the UK Meeting up with his estranged daughter at Bar Wu in the heart of a bustling Chinese city, police officer Zhong (Jackie Chan) finds […]