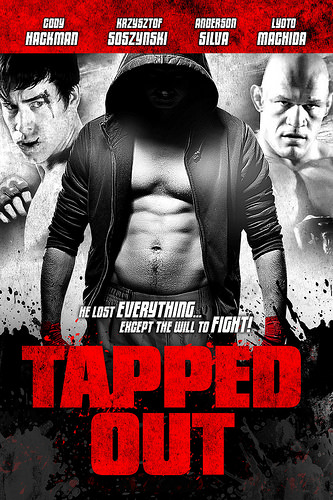 12 year old martial arts prodigy Michael Shaw witnesses his parents murdered at the hands of a carjacker but manages to escape with his life. 7 years later, Michael is living with his grandfather and falling behind at school. Hanging around with the wrong crowds and partaking in booze fuelled house parties, Michael is instructed by his principal that he must do his community service at the local karate club and try harder at school, else he will flunk and not be able to re-do the year that he has already done 3 times. Whilst working at the karate club, he’s invited to watch an MMA bout, but recoils in horror when he spots his parent’s killer is the unbeaten cage fighter, Dominic Grey. With a chance to avenge his parents death, Michael sets his sights on entering the upcoming tournament to seek revenge on the killer, once and for all.

Tapped Out, or Tapped as it is known in other territories, is an old-school type martial arts movie, with a dramatic storyline of an underdog who must face a bigger, stronger and fearsome adversary. Essentially it’s a tale of good vs bad, and we’ve seen it many times before, but that was in the pre early 90’s. Here we have a 21st century tale of the classic martial arts movie, one that incorporates the biggest martial arts movement in modern times, MMA, and highlights the dying trades of the traditional martial arts, such as Karate. Most people these days train in Muay Thai, BJJ and Mixed Martial Arts, thanks to the likes of UFC and Bellator cage fighting organisations. Tapped Out explores how traditional combined with the more popular arts can be used together to create a well-rounded game. We only need to look at the likes of GSP and Lyoto Machida, who stars in this film, to see how a traditional art like Karate can work well inside the cage. 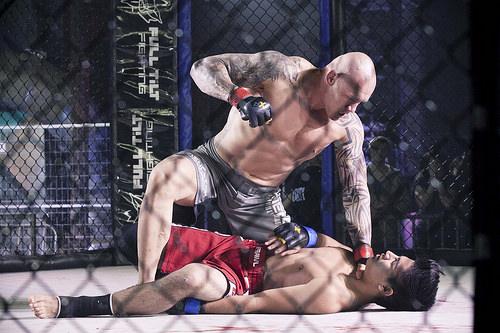 5x World Karate Champion, Cody Hackman, stars as the lead character, Michael. In the beginning of the film, he comes across as a troubled young man with an attitude to match, but when he’s taken under the wing of the karate club, he begins to find meaning and some sort of inner peace and purpose to his life. The Terminator and Aliens star Michael Biehn plays karate master, Reggie, who runs the local school and takes on Michael as the janitor. It isn’t long before Reggie starts to teach Michael the art, with Michael having previously been a talented Karateka, something which ended the night his parents died after watching his grading at the club. Reggie’s disciplined, quiet and respectful nature calms the young man though anger boils to the surface once Michael spots his parents murderer at the cage fight. Former UFC fighter and now retired mixed martial artist, Krzysztof Soszynski stars as the hulking, ruthless Dominic Grey, a fearsome fighter both in and out of the cage. If Michael is to have any chance against Grey, he must add more combat skills to his arsenal with a little help from Reggie’s friends, Anderson Silva and Lyoto Machida! For a karate teacher struggling to make ends meet, he sure knows the big stars! 😉 The Karate Kid star Martin Kove, who played the head instructor of Kobra Kai, John Kreese, also makes an appearance as Michael’s principal.

Tapped Out is entertaining in every way possible. It has the heart-wrenching story which crushes and motivates the lead character; the kind teacher who sees potential and puts faith in the young man to help mend the wounds inside and conquer his fear and grief; and finally, you have payback time in the form of a MMA tournament which is what all martial arts fans will look forward to watching in the movie. With knees, armbars, elbows and all manner of powerful strikes and submissions, the tournament part of the film does deliver. The training aspects leading up the fight, including learning grappling and strikes with Anderson Silva and Lyoto Machida, teaching the children at the gym, padwork with Reggie and practicing punches on the makiwara, all set up for the final segment, the payback and justice in the name of his parents.

Thoughtful, action-packed and intense, this is the sort of classic style martial arts movie that’s been missing from our screens and is fit for the modern age and audience.

Dan Brocklebank – Martial Artist of the Month [May 2013]

Welcome to our very first Martial Artist of the Month, a section of our website which we dedicate to YOU! Whether you’re a regular competitor, black belt in a martial art, an MMA fighter or […]

10% Off and Free Delivery This Weekend Only at Made 4 Fighters!

Massive online MMA fightwear store, Made 4 Fighters, have launched a special promotion to celebrate the Bank Holiday weekend. From 23rd May 2014 until 26th May 2014, get 10% off your order at Made 4 […]

Bad Boy Daily Deal on Shin Guards and Gillets from £14.99!

Are you looking for some new shin guards? Then you might want to check out Bad Boy’s flash sale, today only, offering Bad Boy Legacy MMA Shin Guards for £19.99 a pair and Bad Boy […]