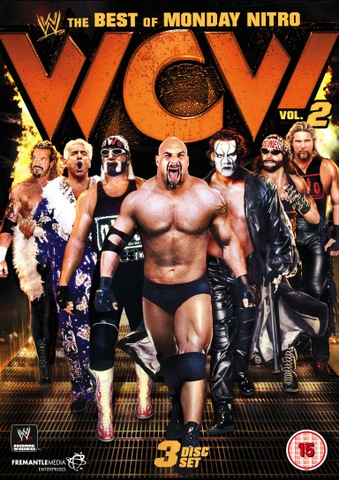 During the mid 1990’s to early 2000’s, World Wrestling Federation (WWF) had a rival in the form of World Championship Wrestling (WCW). Battling for the Monday night spot with wrestling fans was WWF’s RAW against WCW’s Monday Nitro. WWF had such a large presence in the UK, that many of the WCW Nitro matches were unseen by British audiences…until now. WWE, who eventually acquired WCW, have brought out THE BEST OF WCW MONDAY NIGHT NITRO: VOLUME 2, on DVD and Blu-Ray, and if you truly love wrestling, you’ll be on cloud nine with this release.

The first disc features 2 hours of matches, kicking off with the first ever WCW Monday Nitro match between Nature Boy – Ric Flair and Sting. The two enter the ring with matching peroxide blonde hair and as the bell sounds, it quickly becomes apparent just how much the styles have changed. Set in a busy shopping mall with crowds lining the entire upper and ground floor, not to mention the escalators, the match seems a little amateurish. Ric Flair seems to over-emphasise his reactions to being hit and the whole match seems to be a bit theatrical for my taste. Of course, there is always an element of theatrics, even in wrestling entertainment today, but this seemed a little too OTT to the point of cringeworthy. Looking back, however, it is to be expected, and WCW improved thier game, as did the wrestlers.

In the war of words between WWF and WCW, female wrestler and former women’s WWF champion Madusa appears on WCW, claiming to now be a WCW wrestler and shoves her WWF championship belt in a bin, stating what she thinks of the WWF. As far as jibes come, this was quite a kick in the nuts to WWF, with a former wrestler of there’s publicly trashing them, literally.

There’s a huge amount of matches on the disc, including Hulk Hogan vs Arn Anderson, the latter of whom is aided by Ric Flair, and an early look at Rey Mysterio Jr, as he fought Juventud Guerrera for the WCW Cruiserweight Title. It was great to see a young Rey Mysterio doing what he does best, against an equally impressive competitive wrestler in Juventud. One thing that impressed me was the number of Latino fighters in WCW, who even had their own version of nWo – lWo (Latino World Order). Their lucha libre style is always one that impresses me and grabs my attention, so to find WCW representing them so well is an accolade they should cherish.

As aforementioned, nWo, also known in full as New World Order, inspired a generation of wrestling fans, with their initialed logo adorning the t-shirts of hundreds in the crowds. Taking on matches of their own and aiding others, such as Diamond Dallas Page in his United States Championship Quarter Finals fight against Jeff Jarrett, nWo, in particular Scott Hall and Kevin Nash, were the team to beat.

Disc 2 looks at the years between 1997 and 1998, with WCW becoming such an important factor in current culture at that time that even celebrities wanted to be a part of it. They had appearances from professional basketball player Karl Malone, actor David Arquette, martial artists Jean Claude Van Damme and Chuck Norris, not to mention the evil slasher doll, Chucky! Even bands such as Megadeath, Misfits, Insane Clown Posse and the iconic KISS ended up playing at the live WCW Nitro events. One such athlete, basketball player Dennis Rodman, made several appearances actually wrestling in WCW, the first being in 1997 with ‘Hollywood’ Hulk Hogan against Lex Luger and The Giant.

The rest of Disc 2’s 2 hours and 17 minutes running time looks features various matches, including nWo’s Kevin Nash against Rey Mysterio Jr, and Bill Goldberg’s debut fight in WCW against Hugh Morrus. The mysterious Goldberg, standing at 6ft 3 inches, totally demolished Morrus to shock the crowd, in a fight which launched his career in wrestling.

The third disc of WCW Monday Nitro Vol 2 features matches at the back end of the World Championship Wrestling organisations reign before being acquired by WWF, now WWE. WCW in this time had come such a long way, and the matches between 1998 and 2000 just proved how professional a show they could put on, in stark contrast to their very first event. It’s also a delight to see wrestlers such as Chris Jericho in their wrestling career before moving to Vince McMahon’s WWE, something which some of the British viewers might not have seen. At 2 hours and 28 minutes long, the third disc continues to showcase the most memorable and best moments of the final years of WCW.

Throughout the entire volume, Diamond Dallas Page shares some of his memories, experiences and thoughts about certain fighters, matches and times in his career and the others, along with the progression of WCW as an organisation. DDP is a tremendous host and his insights are interesting to listen to, and in some cases, particularly emotional such as when he recounts a message he left for the late ‘Macho Man’ Randy Savage.

The only real issue I have with THE BEST OF WCW MONDAY NIGHT NITRO VOL 2 is when the camera cuts to what would have been an advertisement break during the match. When the programme returns, we find the wrestlers in a totally different position than they were before due to the action continuing. This can be aggravating, especially if one wrestler has gone from losing to having the upperhand within an ad break. Surely the cameras would have still been rolling during the break. However, there’s nothing that can be done about that and if you can look past the minor quibble, you’ll find so much wrestling goodness in Volume 2. Nostalgic and entertaining, THE BEST OF WCW MONDAY NIGHT NITRO VOL 2 is a must-buy for all wrestling fans.

Rookie of the Year

A Celebration of Nitro