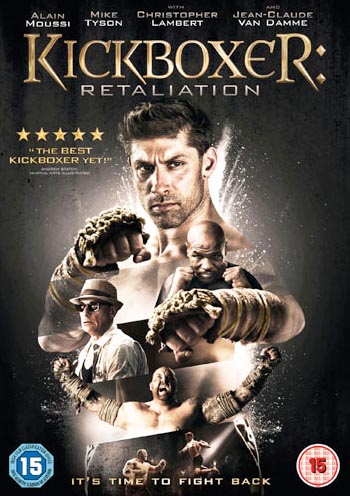 To celebrate the home entertainment release of KICKBOXER: RETALIATION, available now on digital download and on DVD & Blu-ray from 5th March 2018, we have a copy of the DVD, signed by the film’s star ‘Alain Moussi’, up for grabs, courtesy of Kaleidoscope Entertainment!

This follow up to last year’s sensational Kickboxer: Vengeance sees Alain Moussi and Jean-Claude Van Damme teamed up again as Kurt Sloan and mentor Durand – this time, with Sloan facing down one of the screen’s biggest and most brutal villains, in the shape of underground champion Mongkut, played by the incredible Hafþór Júlíus Björnsson, famous as unstoppable ‘The Mountain’ Gregor Clegane in Game of Thrones.

Hollywood stunt performer Alain Moussi, flexing his acting chops as well as his muscles, and original Kickboxer star Van Damme make a great pairing as the hotheaded novice and the wise veteran. The A-grade cast also includes Highlander’s Christopher Lambert, on brilliant form here as the villainous Thomas Moore, forcing Sloan to fight against his wishes; as well as boxing legend and Hangover star Mike Tyson, who is drafted in to get Sloan ready for the mother of all bouts.

With exotic Thailand locations, fiery fight scenes and some stupendous stunt-work, KICKBOXER: RETALIATION is a no-holds barred-slice of slam bang cinema. With a finale that will make your eyes water, this is a blistering blast of mixed martial arts mayhem that hits the viewer right between the eyes.

The film is also available in a brilliantly bone-crunching box set paired up with KICKBOXER: VENGEANCE, which sees Jean-Claude Van Damme training up Alain Moussi for a killer bout against Guardians of the Galaxy and Spectre star Dave Bautista.

For your chance to win this signed copy, simply enter our competition below

T&C’s
• This promotion is open to UK residents only.
• Entrants must be aged 15 years or older
• There is no cash alternative to Prizes which are subject to availability, non-transferable, non-negotiable and non-refundable. Prizes may not be sold, offered for sale or used in connection with any other competition or promotion by the Prize winner
• 1 winner will win 1x signed Kickboxer: Retaliation DVD.
• The Editor’s decision is final and binding on the entrants. No correspondence will be entered into.

Britain’s biggest martial arts equipment stockist, specialising in the traditional martial arts, BLITZ SPORT have just launched an awesome competition on Twitter where you can bag yourself £200 in Blitz Sport gift vouchers to spend […]

To celebrate Cine Asia’s grand return with CALL OF HEROES – Available from Monday 2nd January 2017 on DVD, Blu-Ray and VOD, we have a Blu-Ray copy to give away courtesy of Cine Asia. Synopsis: […]