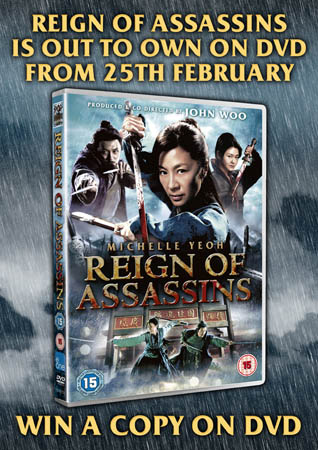 Co-directed by King of Action John Woo and starring the stunning Michelle Yeoh, Reign of Assassins leaps on to DVD on 25 February 2013! Described as ‘the best wuxia since Crouching Tiger, Hidden Dragon’ by The Global Times, and awarded 4 stars by Empire, this period-set martial arts actioner combines the action-comedy and romance of Mr. & Mrs. Smith with the identity swap thrills of Face/Off and is an absolute must-see!

To celebrate the release of Reign of Assassins we’re giving away a copy on DVD courtesy of eOne!

Who produced and co-directed REIGN OF ASSASSINS?

To enter, just send your answer along with your name and address to contact@shop4martialarts.co.uk with the subject ‘Reign of Assassins‘.

The competition will close at 11.59pm GMT on Friday 8th March 2013 and one winner will be picked at random from the correct entries.

T&C’s
• This promotion is open to UK residents only.
• Entrants must be 15 years or over
• One entry per household
• There is no cash or other alternative to the prize stated and the prize is not transferable and no part or parts of the prize may be substituted for other benefits, items or additions.
• 1 winner will win 1x Reign of Assassins on DVD.
• The Editor’s decision is final and binding on the entrants. No correspondence will be entered into.

Pre-Order FOR ALL MANKIND: THE LIFE & CAREER OF MICK FOLEY and Get Free Mr Socko Glove Puppet from WWE DVD

We’ve just received this cool news of a special giveaway offer to WWE fans in the United Kingdom! WWE DVD are delighted to announce that the first 300 fans to pre-order Mick Foley’s new DVD […]

Those cool cats over at online fightwear store MMA Universe have some superb offers live at the moment, most notably 20% off selected rash guards and MMA shorts from a range of brands including Manto, […]