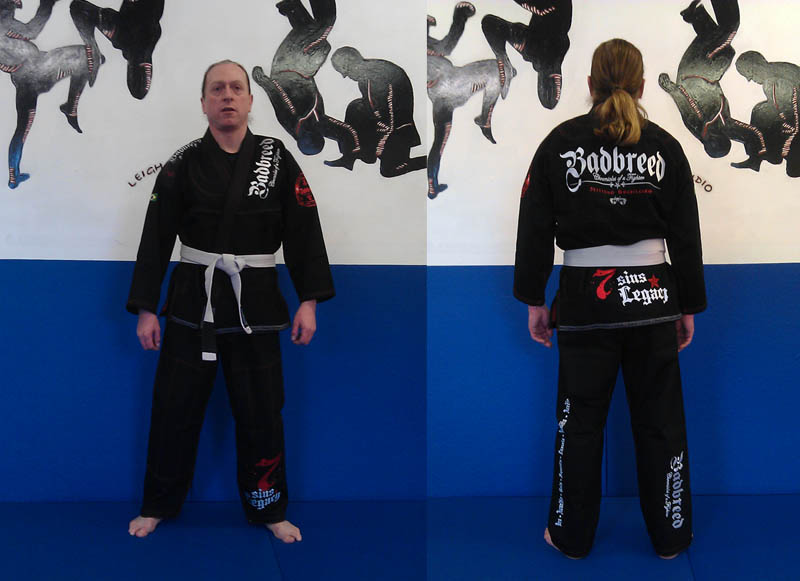 At our ju-jitsu club, not only do we drill locks, takedowns and throws, but we do a great deal of grappling too. Due to our rough and rugged style which incorporates the Brazilian Jiu-Jitsu ground game, we wear gis that are up to the job: BJJ gis.

BJJ gis differ from many other gis due to their stiffer collars and tough construction which makes them incredibly hard to rip when training, something which we need when training Atemi Ju-Jitsu and grappling where our opponents attempt to grip and use our gi against us at every opportunity.

When it comes to BJJ gis, the Badbreed Brasileiro BJJ Gi is certainly one that catches the eye with its premium design and expensive looks.

The gi jacket is made from a strong yet soft and lightweight 550 gram cotton pearl weave, whilst the gi trousers are made from a ripstop fabric. Both the gi jacket and the pants feature red stitching and white and red embroidered logos and script.

Just on the jacket itself, there’s a wealth of design. On the left of the chest, running along the side of the collar, is white embroidered ‘Badbreed Chronicles of a Fighter’ script, and a red embroidered, large red circular logo on the upper of the left sleeve, which describes how the gi was made in torment. The right side of the gi jacket features a Badbreed 7 Sinner patch stitched to the shoulder, and a small Brazilian flag embroidered onto the upper of the right sleeve. 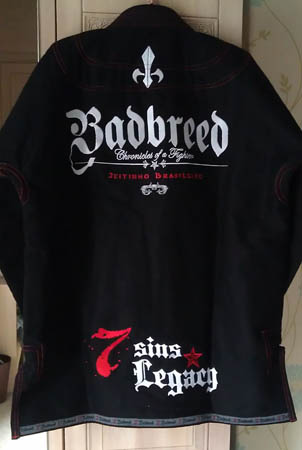 If you remember Badbreed’s previous outing, the 7 Sins gi, then you’ll recall how the back design was a bit fancy. Badbreed have toned down the design, whilst keeping it quite prominent in their latest gi, the Brasileiro. Starting from the back of the neck is a medium sized fleur-de-lis embroidered in white, followed by a large ‘Badbreed Chronicles of a Fighter’ embroired design in white below. This particular design takes up much of the upper back, and also features red embroidered script which reads ‘Jeitinho Brasileiro’. The word Jeitinho is said to mean “to find a way of doing doing things”, not always by the social norm. A rule breaker, if you will. I think that phrase really suits this gi, as I’ve never seen one quite like it.

Finishing off the bottom of the gi jacket on the back is a 7 Sins Legacy design embroidered in red and white, along with grey trim tape repeatedly bearing the Badbreed brand name. If you love embroidery rather than stitched on patches, this is definitely your type of gi. Patches can have a habit of coming unstitched over time and multiple washes, but embroidery, if done properly like this, is built to last and depicts a gi that has hard more time and effort put into it, that is why I personally love embroidery over patches.

Phew, I hope you took all that in, because the Badbreed Brasileiro Black BJJ Gi really is a gi with such a wealth of design it’s hard to keep track. Did I mention the gi features an inbuilt, lycra rashguard lining with winged Chronicles of a Fighter logo print?

In this review, we tested the A2 size.

Unfortunately, the gi was a bit too big to fit my 5’2″ stature so I begrudgingly let my fellow Shop4 Martial Artist and teammate Rob test the gi (once he managed to prise it from my iron grip).

With a height around 5′ 7″, the gi fits Rob rather well, though is a bit shorter on the sleeves than he would normally wear. The gi itself though fits Rob’s physique and stature well, with just the right amount of wrap over on the gi jacket as to not be too loose or too tight.

The gi pants fasten by a cotton twill drawstring that runs through the waist of the gi, allowing you to adjust the waist and get as tight a fit as you require.

One of the major plus points of the gi is the inbuilt rashguard which means you can choose to go bare skin under the gi without the need of wearing a rashguard, with the inbuilt one able to wick away the sweat as you roll. Very handy. If you like to compete in BJJ competitions, do be aware that some BJJ organisations do not allow gis with inbuilt rashguards to be worn at competitions, so either read the rules first or take a spare gi incase if you do decide to wear this one.

Rob shares his thoughts on wearing the gi during training:

The Badbreed Brasileiro BJJ gi is really comfortable when grappling, with a nice weight that is neither too heavy or light.  I can roll for two hours straight and still feel comfortable wearing it. I really like the detail and embroidery on the gi which sets it apart from others, especially the use of red and white on the black gi.

I like that I have the option to go without wearing a rashguard myself, with the gi’s inbuilt rashguard completely lining the inside of the jacket and right down the sleeves, falling just short of the wrist, which is useful in this hot summer we’re having. The gi seems really tough too and puts up a good resistance to lots of pulling and grabbing when we roll.

The gi pants are a good length and fasten tight around the waist. I’ve yet to lose the draw strings during a wash which has happened with my other gi, of a different brand, in the past.

This is a top gi. It feels good and fits well and looks awesome. Actually, it looks too nice to wear.

The Badbreed Brasileiro is a very fine gi of premium quality to match the rest of the brand’s fight gear collection. For someone who likes a bit of decoration on their gi, the Brasileiro is an excellent choice, particularly considering it’s a hard-wearing pearl weave and features the inbuilt rashguard too.

A great all-rounder BJJ gi that does the job that’s asked of it.

The Badbreed Brasileiro BJJ gi is available in sizes A1 to A4, in black or white.

Make sure to check out more of my BJJ gi reviews.

One of the UK’s leading martial arts brands, Blitz Sport, have launched the brand new Adult Titan Boxing Boots. Available with black, blue and red laces to give the boots a splash of colour, the […]

If you train in MMA and are looking to fight in the cage, then you need a pair of durable competition MMA gloves. In this review, I’ll be giving our verdict on the new Badbreed […]