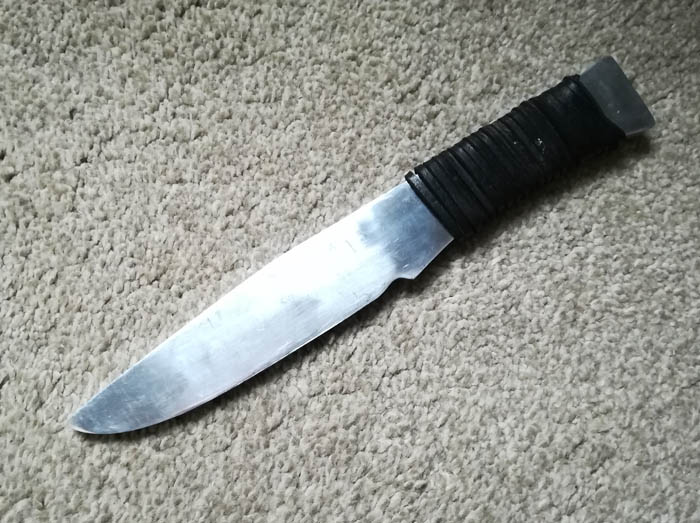 In self defence arts like Ju-Jitsu, Krav Maga and Kali, you want to ensure that you include weapons training and defence as part of your studies. The best way to do this is to use training weapons specifically made for this purpose to replicate the sort of movements you’d expect from an opponent wielding one.

One of the main suppliers of martial arts training weapons in the UK is Blitz Sport. Having previously reviewed their rubber training knife, in this review, I’ll be taking a look at the Blitz Aluminium Training Knife.

When you’re being threatened with a knife, what should you do? Run. Run as fast as you can in the opposite direction. Unfortunately, sometimes it’s not that easy to escape and you have to engage with the assailant to disarm them to give you a better chance of survival. 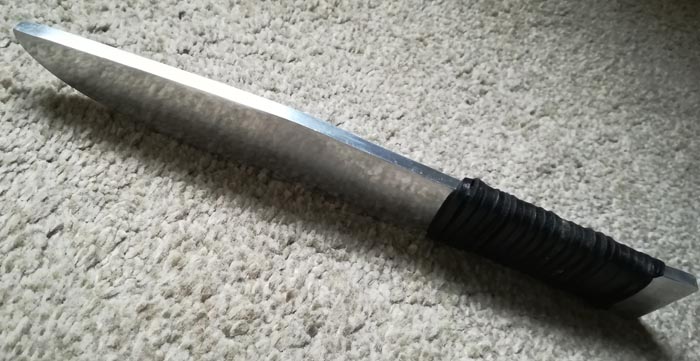 In Ju-Jitsu, we regularly train with practice blades to understand what body positioning, movement and technique is best used for different situations, whether you’re being pinned against a wall with a knife held up against your throat or in the case where someone is actively swiping or stabbing at you. All are daunting prospects but it’s important to have a practice knife that can help you to mimic the situation as best you can in the safest way possible.

Whilst rubber knives are quite popular due to the fact they can bend and are therefore softer to work with, the Aluminium Training knives are just as good, if not more realistic due to the fact they don’t bend. The Blitz Aluminium Knife measures just over 10 inches overall, with the handle measuring around 4.5″ and the blade measuring 5.5″. The practice knife is quite thick too measuring a quarter of an inch in thickness, with a blade 1.25″ wide at its widest point, making for a broader weapon than the rubber counterpart. Wrapped in faux leather bands to provide comfort and grip at the handle, this aluminium knife is one bad boy. Even though it is rounded off at the end and not at all sharp at any point, you want to make sure you’re defending correctly when using this one over a rubber knife, as this one isn’t going to bend for you. 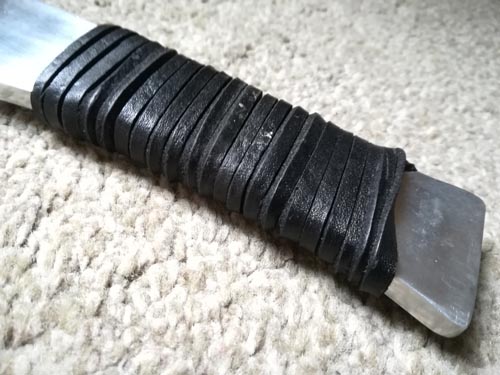 Despite its threatening appearance, the aluminium knife is quite lightweight, only weighing around 150g. If you do happen to miss your block or evasion and get hit by the knife, it doesn’t really hurt much, making it safe to train with. Posing as an attacker or training with the knife as an actual method of defence, the knife feels a lot more agile and easier to handle, perhaps because of the narrower, wider handle and balanced weight. This makes it perfect for use in the Filipino martial arts Kali Escrima Arnis where knifes are used as part of the combat arts.

I personally train predominantly in the art of Ju-Jitsu, where we defend using empty handed techniques, evading, blocking and joint-locking opponents to protect oneself. However, I have also dabbled in some Filipino drills too from Abaniko Tres Puntas, such as the hawi and tapi drills. The knife feels comfortable when drilling techniques and also whilst attacking and defending with me able to maintain the grip even when my hands are sweaty.

As martial arts practice knives go, the Blitz Aluminium Training Knife feels well made and of good quality. It’s simple in design but has the grip and balance that make it such a valuable, practical tool when training knife attacks and defence. For those who are looking to train with something other than a rubber knife, this is a fantastic choice that won’t break the bank either.

When training in martial arts, especially self-defence, there are times when you need to learn how to defend yourself against knife attacks. Of course, the first rule is to run away from any attacker who […]

When training in Muay Thai, Kickboxing, MMA and other striking martial arts, having a good pair of thai pads is a key element of training and improving your technique, be it practicing punching, uppercuts, elbows […]