In Japanese Ju-Jitsu, the weapon that is held in high esteem over all others would have to be the katana. As I’m approaching my black belt grading, I’m looking to perform a weapons kata and have been practicing in the recent months using a wooden bokken in place of a real katana for both praticality and safety.

In this review, I’ll be giving my opinion on the Blitz Sport Black Oak Bokken.

I purchased the Blitz Sport Black Oak Bokken a couple of years ago but I’ve been using it more in the last 12 months due to my upcoming grading, with a keen interest in learning how to use such a weapon in martial arts training properly and effectively. 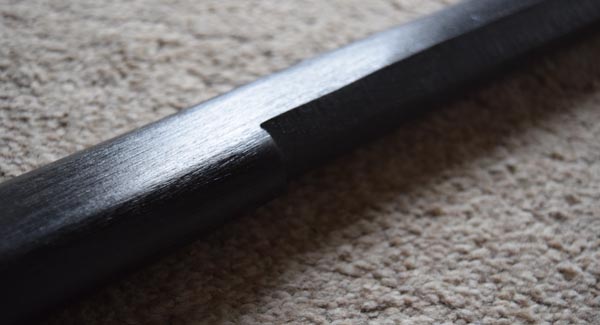 The Blitz Black Oak Bokken measures 40 inches overall (10.25″ for the handle, 29.75″ for the ‘blade’), weighs 700g and comes with a black rubber ring and brown patterned tsuba. The bokken’s hilt is properly defined, where the blade section meets the handle, with a cut-out which the tsuba can sit against. Upon first placing the tsuba and ring onto the bokken, it took me around 25 minutes of patient wiggling to get it into position. As a bit of an OCD perfectionist when things become “out of place” or loose, even ever so slightly, I found myself tightening the ring to the tsuba so it was flush to the hilt whenever I used the bokken. Observing this, my Sensei whipped off the ring and tsuba as it was causing a distraction to me. This didn’t bother me though I did weep a little inside as it took so long to put it on the bokken and only a couple of seconds to remove it. 🙂

The bokken itself is quite a weighty weapon. It’s much heavier than the bokkens at the dojo which I also use. I find the weight of the Blitz Bokken better for working my arm strength and practicing slices and cuts, however, for performing a kata as cleanly as possible, it’s a bit too heavy. Practicing with the heavier bokken though allows me to be more fluid when using lighter bokkens as I’m used to handling much heavier weapons. I also sometimes prefer to hold the bokken a bit further up with my right hand gripping over where the tsuba would be as I feel it gives the bokken a better balance and therefore I have more control of it.

Compared to the other bokkens in our dojo, the Blitz Sport Black Oak Bokken is a touch longer. This is no issue to my fellow students, nor my Senseis who are each over 6ft tall, but as a petite female at 5’2″ (or 5’1.5″ as I’ve been told in more recent times), the bokken is too long for doing certain cuts that require me to wield the weapon in such a way that just skims across the surface of the floor. For all other uses, I don’t have a problem and my height is the only downfall which makes this particular bokken a touch too long for performing the katas where a slice like this is required.

The Blitz Sport Black Oak Bokken is a superb, high quality made, solid bokken and serves its purpose as a training weapon more than adequately. I’ve used it against other students wielding bokkens with numerous clashes and the bokken has suffered no damage and remains to be a strong, durable training weapon that continues to be of perfect use for weapons training.

About Steph 828 Articles
I'm a 1st Dan Black Belt & certified coach in Japanese Atemi Ju Jitsu, have trained in Muay Thai and currently train in CSW (Combat Submission Wrestling) and CSBJJ at MCKG under Mel Corrigan. I love to compete and have medalled at openweight events. I've a total appreciation for all martial arts and always eager to learn new techniques!
Website Facebook Twitter

Black Friday is here and to celebrate, leading martial arts supplier Blitz Sport have unleashed a voucher code offering customers 15% off their order. With everything you could want for most martial arts disciplines, Blitz […]

Save 30% at Blitz Sport in #BlackFriday Sale

Blitz Sport have unleashed their Black Friday sale with 30% off everything on their website for today only (27th November 2015)! Just use voucher code BF2015 at checkout to get the 30% discount. From weapons […]