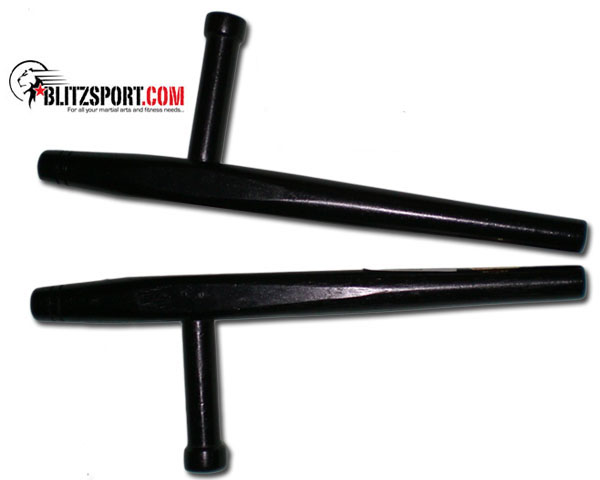 Tonfa have long been the weapon choice of police officers around the world, with the nightstick often referred to as a baton or truncheon. However, it is in martial arts where the application of duel tonfa have been used more frequently. Their appearance in last year’s martial arts flick, THE RAID, in which Pencak Silat star Iko Uwais uses tonfa to battle with a deadly group of unsociables in a high rise apartment building, helped to highlight the weapon to martial artists and the general public around the world.

We were fortunate to test and review a pair of Blitz Sport Black Oak Wooden Tonfa and we were not disappointed.

At 18 inches in length and weighing 500g, the quality of the Blitz Sport tonfa is exquisite. The dyed red oak structure feels dense and sturdy and the tonfa have a fluid feel when twirling through the palm. As beginners to tonfa, we found the learning curve of rotational moves using the tonfa much steeper to master than that of the nunchaku, but it is to be expected with the method in which tonfa are used. The rounded tonfa taper towards each end of the shaft and the handle has a slightly wider end to prevent your hand from slipping off the handle during use. The length of the tonfa are perfect, running along the underside of the forearm and ending at the elbow, providing complete coverage.

When using the tonfa, we found that wrist movement alone is not enough pivot the tonfa, that effort using the hips is the key as well as the arms. Other techniques we experimented with included blocking attacks from the escrima stick, which the Blitz Black Oak Wooden Tonfa stood up to. With the shaft lying upon the underside of the forearm with a firm grip upon the handle, the tonfa are perfect to defend any oncoming attack, be it sword, bo staff or escrima stick. The tonfa can also be gripped by the handle and used as an offensive weapon by punching your enemy. The shorter, stubby end of the tonfa will do considerable damage to your opponent. Other uses include wielding the tonfa in such a way that you can trap and hook limbs and also takedown your opponent.

Tonfa are such a unique weapon and take a lot of practice and skill to perform high speed techniques, however simple defence techniques are easier to master and practice.  By blocking oncoming attacks using the tonfa, speed can be built and the reflex improved. The tonfa can also be used singularly, for instance by using a rubber knife in one hand, such as the Blitz Sport Rubber Knife, and a tonfa baton in the other, mixing both offensive and defensive techniques into your training.

The Blitz Sport Black Oak Wooden Tonfa are a great pair of tonfa and are ideal for any beginner or experienced practitioner. The tonfa are also available in 20 inches length.

The Blitz Sports Black Oak Wooden Tonfa are available for £14.24 from Blitz Sport

The roots of the nunchaku weapon can be traced back to two farming mechanisms – the muge (horse bridle) and a mechanism used to grind rice or grain. Nunchaku are still used today in many […]

Britain’s biggest martial arts equipment stockist, specialising in the traditional martial arts, BLITZ SPORT have just launched an awesome competition on Twitter where you can bag yourself £200 in Blitz Sport gift vouchers to spend […]

If you train Muay Thai, Kickboxing, Boxing or MMA, then you’ll want to head on over to Blitz Sport’s website where they’re having a sale on discontinued items which include Gel Tech and Precision Strike […]