Welcome to November’s edition of Martial Artist of the Month, a section dedicated to YOU – the martial artists of the world. 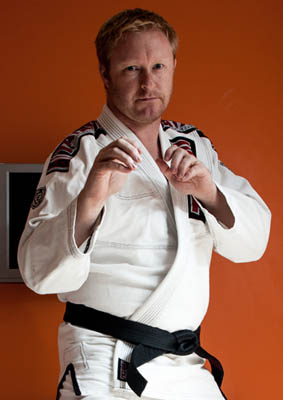 Please can you tell us a bit about yourself?
I’m a 6ft tall ginger bloke living near Manchester. I’m married with two girls and have studied Jujitsu for around 18 years. Currently I’m graded at 2nd Dan and planning to go for 3rd Dan early in 2014. I also have a goal of BJJ Blue Belt in 2014. When I’m not working or at Jujitsu, I enjoy wasting time with my wife and kids, preferably out in the fresh air.

How old were you when you got into martial arts and what made you want to learn?
I was around 7. A friend at school said to me, “Come to the grading’s this weekend. We will be breaking wood and stuff.” It sounded ace. As it turned out, he was taking his yellow belt and there was a distinct lack of breaking stuff.

Which martial art did you learn first?
Karate, firstly when I was 7. After 18 months or so we moved house and I was no longer able to attend. A new Karate club opened locally when I was 12, I had to put a white belt back on for that. I trained there until I was 15.

Have you entered any competitions or done any demonstrations?
I have been in a few grappling competitions and tried an MMA competition. I don’t really have the aggression required for competition. I tend to treat it as a game until I’m actually in danger. It’s too late by that point.
As a club we have done a few demonstrations, mainly at local fayres. One club member was part of the England Jujitsu demonstration team that took Gold in the 2010 Las Vegas Championships.
Most recently we put on a demonstration as part of the club reopening after a referb where Andy Burnham our local MP attended and the club has got a nice boost.

Which is your favourite weapon and why?
Katana. I think the movie Highlander is responsible. From a practical sense stick/stick & knife used in Kali. In all seriousness, i think that knife crime is becoming so common that you really need to know what to expect if someone ever pulled one. You can also find or use lots of things as sticks should you need one. It’s not really practical to carry your samurai sword around with you.

Which is your favourite technique?
I have two favourite moves; o soto gari– it’s one of the first things you learn, it’s one of the simplest, it’s one of the most effective take-downs and can be adapted to whatever I have decided to practice this week, could be an armbar, could be an escape from a bad position or something I saw in a competition. It changes all the time. I love the showy stuff that’s good to show off with and ‘peddle your wares’ but the grass roots stuff that actually works is where it’s at for me.

Who inspires you in the martial arts world?
Erik Paulson. I love watching him teach. He will say something like “here are 4 techniques” and then proceed to show 20. Most of the content on youtube trying to show you techniques are rubbish despite good intentions. There are a handful of people, like Erik who are able to present in a way that makes it just so clear and easy to pick up. As a result of these handful of people, you have instant access at home to the worlds best.
Closer to home, I admire any girl/woman who comes on the mat. The place is full of big sweaty guys and it must take a LOT for them to get in there and mix it up with us all. It’s brilliant the first time a woman taps a man in grappling. I can only imaging the confidence it gives them in life knowing they can do that. What is even better is the look on the guys face when it happens and he realises he is being beaten by a girl. 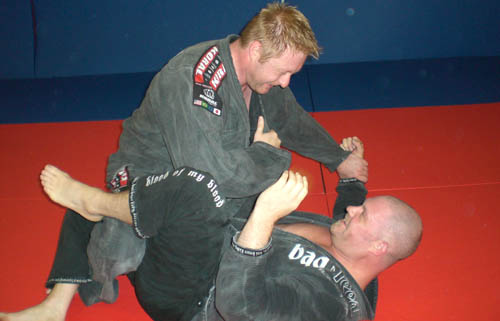 What are you most proud of in your martial arts career?
A complaint I got from a student. I started a nogi grappling class on saturday mornings a couple of years ago. it’s mainly attended by smaller members of the club’s regular classes. It brought a big old smile to my face when one of the larger members came up to me after training complaining that he was now unable to tap someone who had been attending the Saturday classes.

Have you any advice to give to other martial artists out there?
Make sure you leave the ego off the mat and learn from whoever/wherever you can, regardless of style or what colour belt is around someones waist. Being tapped is part of the learning process, trust me, if you are getting on the mat every week, you are getting better even if it doesn’t feel like it.

What’s your favorite martial arts film?
I’m a Bloodsport man. In the final fight, the camera starts panning around and moves behind some pillars in the room blocking the viewers view of the fight, to this day i try and look round them in case i miss something. The whole thing is quite nonsense of course but its brilliant entertainment. I remember at school, when Van Damme breaks the bottom brick, everyone was going round saying “he actually did that you know” HAHA

Thanks very much, Chris, for your time!

If you’d like to be considered for Martial Artist of the Month , be sure to drop us an email.