As we welcome in the New Year of 2014, we also welcome a new Martial Artist of the Month to Shop4 Martial Arts, and January’s martial artist hardly needs an introduction. The chances are if you’ve trained in BJJ, you’ll likely own a piece of this guy’s artwork on one of the many rashguards, t-shirts and grappling spats he’s produced and collaborated on…

In this month’s interview, we chat to Seymour ‘Meerkatsu’ Yang to discuss martial arts life behind the art… 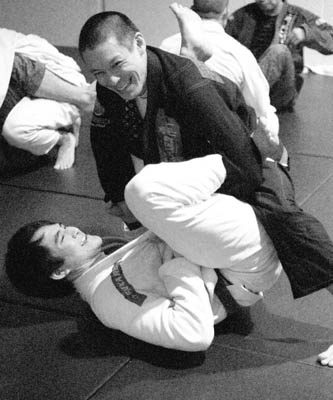 Hi Seymour, please can you tell us a bit about yourself?
I am a UK based illustrator, writer and designer who practises the martial art/sport of Brazilian Jiu Jitsu

How old were you when you got into martial arts and what made you want to learn?
I was 18 and my first martial art was Kyokushinkai Karate at University. I chose it because it looked cool as the guys were breaking boards and kiaiing really loudly at Freshers Fair. I trained karate until I graduated and after Uni I moved from kickboxing to Japanese style Traditional Ju Jitsu (TJJ) before settling on Brazilian Jiu Jitsu (BJJ).

Have you entered any competitions or done any demonstrations?
Yes plenty, I competed a lot when I was training TJJ and I have competed a lot at BJJ too. I have won a few golds, lost a hell of a lot too.

Which is your favourite weapon and why?
When I was studying TJJ we would train a lot of kobudo – nunchukas, bo staff, katana, sai, tonfa and various other weapons. Of those, I loved the tonfa the most – it was simple, direct and effective and required the least dexterity to use. I quite liked the idea that Okinawan farmers fashioned these wooden sticks out of rice grinders and beat the crap out of each other with them.

Which martial arts are you currently studying and at which clubs?
I am currently a brown belt in BJJ training out of the Mill Hill Roger Gracie BJJ Academy in Mill Hill North London. For those unfamiliar with BJJ, to sum, it is a grappling based combat sport where we use our knowledge of leverage and submissions to subdue an opponent, mostly based on the ground. 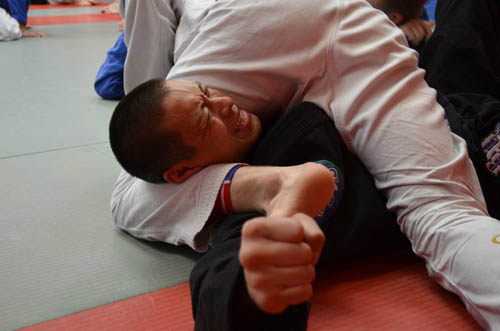 Which is your favourite technique?
I usually rotate through my flavour of the month techniques frequently but time and again I come back to submissions that utilise the uniform itself (known as gi lapel chokes). I guess it is because it uses something that is very traditional and seemingly benign (the gi) as a quite nasty weapon when it is wrapped around the neck for a submission.

Who inspires you in the martial arts world?
My instructor Nick Brooks would be my personal inspiration. He doesn’t preach or force you to do anything, he simply leads by example. He’s in his mid forties and his body is a miracle of modern medicine owing to all the injuries he has picked up yet he still competes and submits guys twice his size though sheer technical mastery of the art.

Have you any advice to give to other martial artists out there?
Not really. Martial arts is a curious entity in that it is both a life choice and a hobby. Most people I know who train BJJ do so with an obsessive passion. As long as it is enjoyable and fun, then keep doing what you are doing.

Thank you very much, Seymour, for your time!

Each month, we interview YOU, the martial artists of the world. For October’s ‘Martial Artist of the Month’, we chat to British BJJ competitor, Vanessa English. Please can you tell us a bit about yourself? […]

Dan Brocklebank – Martial Artist of the Month [May 2013]

Welcome to our very first Martial Artist of the Month, a section of our website which we dedicate to YOU! Whether you’re a regular competitor, black belt in a martial art, an MMA fighter or […]