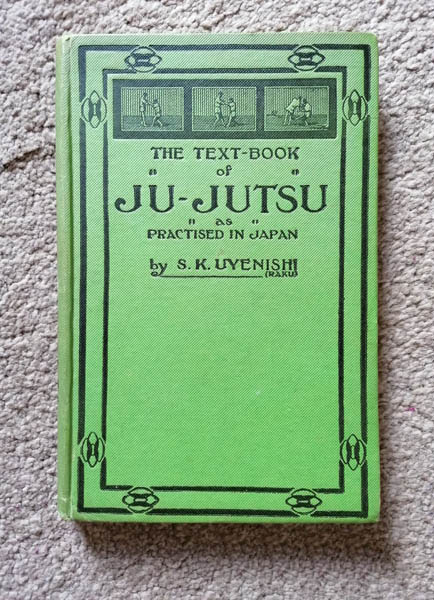 As a practitioner of Japanese Ju-Jitsu and a keen bookworm, getting hold of and delving into these early 20th century books of Ju-Jitsu is such an exciting and enriching experience. It’s so interesting to see how the techniques have developed over the decades and last century to what is being taught today and which techniques remain classic and ever-green.

I managed to get my hands on an 8th edition of Sada Kazu Uyenishi’s 106 page book ‘The Text-Book of Ju-Jutsu as Practised in Japan‘. Originally published in 1907, the book is one of the earliest publications of Ju-Jitsu in England, penned by S. K. Uyenishi, also known by his stage name Raku, who came over to England with Yukio Tani on invitation of Edward Barton-Wright who became known for Bartitsu.

In this article, I’ll be reviewing The Text-Book of Ju-Jutsu as Practised in Japan, its contents and how it relates to Japanese Ju-Jitsu as taught today.

Contents of The Text-Book of Ju-Jutsu

Following a foreword by Percy Bickerdike, a Member of the British Ju-Jutsu Society, and a preface from Uyenishi himself, the book is split into five chapters: Introduction, Balance, Breakfalls, Throws, Locks and Sada Kazu Uyenishi – A Word Portrait.

In the introduction, Uyenishi provides an overview of Ju-Jutsu as a martial art, from its origins in Japanese to how it’s practised in the modern day (well, as of 1907). He relates it to other martial art styles from Japan that differ whilst detailing the usefulness of Ju-Jutsu as a yielding, “soft” style compared to the hard styles of Kendo and the like. It’s no wonder that the army and police found Ju-Jutsu to be worth incorporating into their training regiment.

Throughout this introduction to the martial art, Uyenishi also touches upon diet and health, and the physicality of the style before uttering words of caution for whoever decides to practice the techniques based on the information in the subsequent pages. As always with any instructional, it’s best to get direction and assistance from someone experienced and skilled in the art unless you have a very good grounding in the arts yourself in similar styles.

In this particular chapter, Uyenishi discusses the importance of keeping your balance when facing an opponent. He discusses the mechanics how to maintain your balance with a particular focus on footwork and the direction of which energy and force is being directed to you by an opponent. There’s not so much talk of kuzushi (the art of unbalancing an opponent) in this particular section but he expands upon this in the individual throwing technique breakdown in the subsequent chapters. Uyenishi imparts his knowledge on how to keep a strong posture and how to avoid becoming off-balanced to negate a throw attempt by an opponent. This is all important to the concepts of Ju-Jitsu, particularly as the martial art is built upon utilising balance and leverage.

The first thing anyone practicing Ju-Jutsu learns before even attempting a technique is how to fall properly. In this book, Uyenishi discusses why practitioners breakfall and the mechanics of doing so before details six different ways to breakfall in order to protect yourself from injury when being thrown. From side breakfalls and the back breakfall to ‘Jump Into Space’ front breakfall and a breakfall from a forward roll, also known as ‘Head Over Heels’, all the basics are covered in this book with pictorial and text descriptions of how to breakfall properly and effectively. The step-by-step descriptions are thorough whilst care is taken to make them accessible to complete novices with some of the breakfalls done from a low squat position.

It’s been over a century since Uyenishi published this book, but I’m sure he’ll be pleased that all of the throws he shares in this book are still being taught today in some degree. Quite a few of the techniques are more seen in Judo than they are Ju-Jitsu, but seeing as Judo was a derivative of Ju-Jitsu a crossover is to be expected.

With each throw, Uyenishi briefly describes how to execute it before going into greater detail about the set-up, kuzushi, footwork and body mechanics and the final throw or takedown element in order to execute the technique properly, whether it’s a sweep, throw or sacrifice move. It’s easy to visualise his descriptions, and his own breakdown of the technique brings more dimension to the initial direction provided which is pretty brief.

When reading and using martial arts books as a reference, whether they be old or modern books, the images shown often make a world of difference in translating the technique to the reader. After all, it’s not like there’s someone in front of you doing the technique that you can analyse each and every part. What is refreshing about the visual elements of this book is that not only are there full size depictions of the main body of the throws and techniques performed by Uyenishi but for each throw there’s a film strip of 24 photos in three columns of 8. Shot by Gaumont et Cie, each of the ‘throw’ techniques in the book have been performed on film first and the subsequent stills republished in order so you can see the flow of the throw.

Whenever I’ve tried to photograph throws at my local Ju-Jitsu club, it’s so difficult to capture a single image that accurately shows the technique as there’s so many elements that go into a throw. Likewise, when you look at single still images in a book they often miss out vital parts. However, in this book they’ve managed to take footage and break it down, presented in a static visual format, so you can see every step of the technique. I really wish more martial arts publications would do this as it would deciphering the technique much easier!

Newaza fans will be glad to know there’s a section dedicated to joint locks in this book,  with The Arm Lock (armbar/Juji Gatame); The Second Arm Lock (a V armlock from kesa gatame); The Third Arm Lock (double wrist lock/Ude Garami); The Leg Lock (Straight ankle lock/Achilles lock/Ashi-hishigi); The Neck Hold from mount and from the bottom (Cross Collar Choke/Nami Juji Jime); Single Cross Collar Choke with Arm Break from behind; Guillotine; and Hadaka Jime (Naked Choke from behind).

These techniques are widely used in Ju-Jitsu, Judo and BJJ, another derivative of Ju-Jitsu, and other grappling arts today, such is their effectiveness.

Like the throws, Uyenishi goes into detail and shows clear images of the techniques though this time it’s just large, single page images rather than including additional film reel stills. When talking about the locks, he discusses the positioning and pressure required to get the submission and which part of the body will succumb to the submission.

I know these grappling techniques are much older than this book but it’s really interesting to see that at the turn of the 20th century visual and written evidence was logged of these moves being practised – effective basics that still work as well as they did then and are still being used today. It’s keeping history alive as well as showing that something as powerful as these submissions worked that well that they earned their place to remain in the studies of martial artists across the globe.

In this six-page dedication by student Percy Longhurst, we find out a bit about the author, Sadakazu Uyenishi who was also known by his stage name of Raku. Longhurst is brimming with respect for Professor Uyenishi and describes how serious he took the art even to ensure that his opponents were not made a fool of.

As an expert swimmer who went on to rescue someone drowning after diving full clothed from Queen’s Bridge in Belfast, and competent in the arts of Roku-shaku-bo and Han-bo (quarterstaff and single stick play) and Kenjutsu sword art, Uyenishi seemed dedicated to effective self defence arts.

The mini biography details how Sadakazu Uyenishi was born in Osaka in 1880 and at the age of 20 years was brought to England by Edward Barton-Wright. He ended up teaching at his own school in London and held the position of instructor of Ju-Jutsu at the Army Gymnastic Staff Headquarters Gymnasium at Aldershot before eventually returning to his homeland which is where he lived til his death. In Japan, he was an instructor for The Military College for Officers (Riku-gun yo-nan gako), The Imperial Military College of Physical Training (Tai-iku-kai), The School of Instructors (Shi-han-gako), The Police Training School (Jun sa kio-shun sho) and All Government Schools in Osaka. To say he was a busy and well respected instructor in his field is likely an understatement.

It’s without a doubt that it’s thanks to Uyenishi and his compatriot Yukio Tani that Ju-Jitsu in the UK is what it is today.

I can highly recommend this book to anyone looking to further their knowledge in the history of Japanese Ju-Jitsu. Whilst original versions of the book, like mine, can be picked up on eBay and in used book shops, you can buy a brand new reprinted version of the book (published in 2018) online from Amazon.

A Guide To Japanese Ju-Jitsu

Japanese Jiu-Jitsu is a misunderstood martial art. A lot of people make assumptions about it because, unlike Karate, Judo and other martial arts styles, it’s not in the Olympics nor is it in the public […]

I absolutely love grappling, both gi and no-gi, and one of my favourite techniques to practice is the Bow and Arrow choke. I’ve yet to get it on anyone during live rolling but there’s still […]

Ever been stuck to buy a present for a loved one who trains in Japanese martial arts? Perhaps they’ve got all the gear they need and they have more gis than they can fit in […]