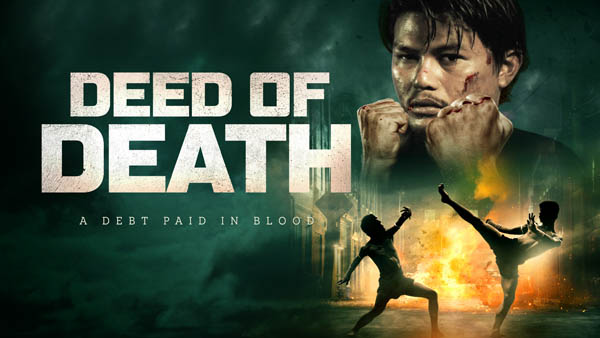 A family are hounded by a loan shark’s henchmen when eldest son Mat Arip gets himself into debt. Having given the deed to his father’s land to buy him more time, Mat Arip finds himself at risk of losing everything, including his life.

Malaysian martial arts film DEED OF DEATH is the debut movie from Areel Abu Bakar, who also serves as cinematographer and producer with writing credits shared with Hafiz Derani. In the film, he weaves a tale of honour, loyalty and family and that when push comes to shove, family will never turn their back on one of their own, especially when someone is trying to exploit them.

The first hour of the film consists of building up the story to introduce the various characters. There’s the father, Pak Nayan (Namron), who seems an honourable man but a bit of a soft touch when it comes to giving his adult kids everything they need, specifically his eldest son. His daughter, Fatimah, and younger son, Ali, are quite respectful of their family and live a traditional lifestyle, keeping their head down and staying out of trouble. The same can’t be said about Mat Arip, the wayward elder brother who spends his time racing cars, hanging around pool halls and gambling on underground fights with best pal, Mi. It he who has bitten off more than he can chew and resorted to borrowing money from loan shark, Haji Doud. Haji Doud’s men want payment and if Mat Arip can’t come up with the goods, then his father will be forced to surrender his paddy fields to pay off the loan. The biggest problem is that Mat Arip has given them the deed already as a guarantee and it’s looking less likely by the second that he’ll be able to pay up and get it back… 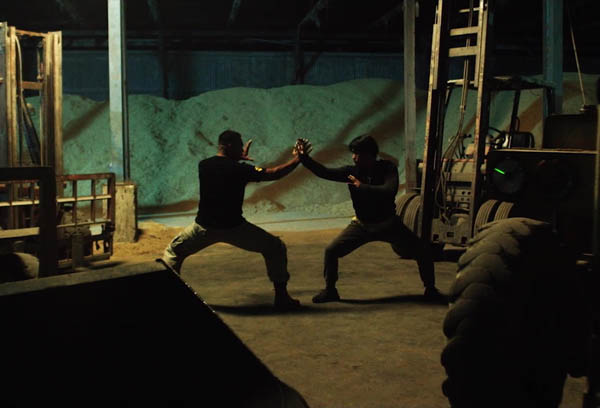 Apart from the first 10 minutes where Fatimah, played by Feiyna Tajudin, unleashes her no-nonsense self defence skills, the film is a bit slow on fight action and struggles to hold its wafer thin story together. That’s until an hour in when things really begin to spice up. There’s fights everywhere, from the port to inside a bus, with the action intensifying to the onslaught of a final 20 minutes. When it finally gets going and dispenses with the tiresome storyline involving Mat Arip, DEED OF DEATH really shines. The silat fight scenes are wonderful to behold with some impressive, straight-to-the-point fight choreography. It feels raw with the footage a bit unpolished at times, which only benefits it more, with Mat Arip, Fatimah and Ali all showing off their incredible skill in the face of tough opponents. There’s plenty of strikes and leg sweeps and even a smattering of flying scissor takedowns (kani basami) and double wrist locks. I don’t think I’ll ever get sick of the rush of front kicks to the chest, knees, elbows, pain-inducing wrist locks and leg locks. Hats off to the actors, who are all skilled in fight craft, who throw themselves completely into the roles they’ve been given.

Silat isn’t a widely seen martial art on film so it’s great to see Deed of Death, also known as Geran or Silat Warriors, showcase more of this effective fighting style, from the striking, joint locks and takedowns to the footwork and use of the sarong. In more recent times, we’ve been blessed by skilled silat practitioners Iko Uwais and Yayan Ruhian on the screen to highlight the martial art, thanks to Gareth Evans’ Merantau Warrior and The Raid films. However, another star to certainly watch out for in the future is Khoharullah Majid, who stars as Ali in DEED OF DEATH. Though an incredibly slow start with hardly a whimper, the latter third of the movie allows Majid’s character Ali time to shine, having been resigned to live the quiet life of a fisherman until he’s given permission to find his troublesome brother. From there, all hell breaks loose and we see a different side to the mild-mannered younger brother. His talents are exciting to watch on-screen as he dispatches his opponents with such efficiency. Fad Anuar also provides some close-quarter combat prowess when his character Mat Arip is forced to confront Haji Doud’s armed thugs. However, serious recognition has to be awarded to Feiyna Tajudin who handles her male opponents like a boss in a rarely seen role and who’s character also boats a no-nonsense attitude when it comes to thugs trying to force their way into her home and life.  Like many of the characters in this movie, there’s a real pool of talent here and I just hope this isn’t the last we see of any of these amazing action stars in the making.

DEED OF DEATH suffers from a weak plot and annoying lead character however it finally comes into its own and excels when it gives the viewer exactly what they want: gut-punching, face-kicking combat. Stick around and you won’t be disappointed!

THE RAID 2 (2014) Indonesian language with English subtitles On Digital Download from 4th August 2014 On DVD, Blu-Ray and Steelbook from 11th August 2014 Set two hours after the events of the first film, […]

Gareth Evan’s martial arts action flick THE RAID 2 will be ass-kicking its way to to DVD, Blu-ray and limited edition Blu-ray steel book (exclusive to Entertainment Store on Play.com) on 11th August 2014 in […]