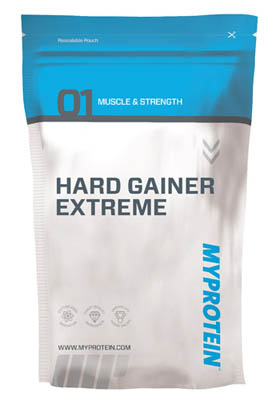 When looking to increase muscle mass people often turn to ergogenic aids such as creatine, beta alanine or pre-workout stimulating formulas and whilst all of these have been proven to work to some degree, research shows that the real key to massive muscle growth is perfecting your intake of primary macronutrient. Here we take a look at the relevant nutrients individually, how they contribute to muscular hypertrophy and how the product development team at Myprotein.com created Hard Gainer Extreme based on the scientific evidence.

Firstly it’s important to understand just how muscular hypertrophy (an increase in the size of your muscle cells) works and its exact physiology. Basically under the appropriate hormonal and chemical conditions, muscle cells proliferate and incorporate satellite cells in to their makeup. Satellite cells are effectively ‘reserve’ cells that are situated on the periphery of the muscle cells, ready to be used in the case of injury or regeneration (Hawke T. 2005). They become relevant once the appropriate signals are received, and they begin to migrate towards the area of damage. Once there, they begin to fuse to the existing myofibres, creating either a repaired cell in response to trauma or an enlarged muscle cell in response to training induced micro trauma. In a study conducted in the Department of Neurophysiology at the University of Copenhagen Denmark, Aagaard et al demonstrated that Type II muscle fibres have a better capacity for hypertrophy than slow twitch fibres. With this in mind, it becomes clear that intramuscular tension is a critical factor for producing gains in muscle size and that heavy weight training (working at 75%-90% of your 1 repetition maximum) provides the most efficient stimulus for hypertrophy adaptation.

But as well as providing the necessary stimulus, muscles also need the necessary nutrients needed for repair and regrowth and this is where protein comes in. Whenever you exercise and send the muscle cell into training induced micro trauma causing tiny ‘tears,’ your body responds by sending nutrients to the damaged myofibrils to help them recover. This is why it’s so important to have a sufficient protein supply after a heavy strength based workout since research shows after a workout your muscles are starved and possess a ‘sponge like’ property that experts believe is responsible for your body’s ability to absorb more protein than any other time of the day (R.R. Wolfe et al, 1995.) In fact research shows your muscles can absorb almost 50% more protein than you can at a regular meal. Lastly regarding your daily protein intake, The International Olympic Committee Consensus on Sports Nutrition states ‘strength or speed athletes require 1.7grams of protein per kg of bodyweight per day.’ For a 100kg strength athlete this equates to 170 grams of protein per day (usually broken down into 6 meals spaced roughly 2 hours apart throughout the day, each containing 28.33 grams of protein each.) That is why Myprotein.com ensured Hard Gainer Extreme included 34.9g of a high quality protein blend containing whey concentrate, milk protein concentrate, hydrolysed whey and calcium caseinate.

Secondly looking at healthy fats needed for muscle growth it seems fatty acids don’t come much better than medium chain triglycerides (MCT.) They provide twice the energy of protein and carbohydrate (8.3 calories per gram versus four) and are absorbed into the bloodstream as rapidly as glucose. Plus they are preferentially used as fuel for energy instead of being stored as body fat which means they spare protein from being used as an energy source and, therefore, your aminos get used for muscle building. This is because some of the energy from MCT oil is converted by the liver into ketone bodies which are used as easily as glucose for fuel. Thus, these ketone bodies replace some of the amino acids used in metabolism and leave them for use in building mass. MCT oil also decreases catabolism of skeletal muscle protein. The efficient utilization of ketones as fuel improves as the body adapts to MCT oil. In other words, your body gets better at using this supplement as it gets used to it. Thus, using it consistently will allow you to get more out of it when you need it.

Lastly a study conducted by Valls, E et al entitled ‘Modifications of insulin and growth hormone after medium chain triglycerides ingestion’ (2010) it was found that the muscle building hormone HGH (human growth hormone) increased 60 minutes after ingesting 1.5 g./kg of medium chain triglycerides. Whilst it’s not known exactly how it achieves this, the benefits of consuming MCT’s if you want to increase muscle mass are evident. That is why Myprotein.com have added Medium Chain Triglycerides to Hard Gainer Extreme’s formula, making it even more anabolic and even more prone to increasing muscle mass when used in conjunction with a good strength training routine.

5kg of Hard Gainer Extreme is available from Myprotein.com for £53.99 (2.5kg for £29.39) and comes in Chocolate Smooth, Strawberry and Vanilla flavour.

DeepBlue Supplements are offering a tub of MusclePharm’s preworkout supp MP Assault V2 290g for just £19.99 TODAY ONLY as part of their Xmas daily deals. Specially formulated to provide you with the most intense […]

Spend £35 at Protein Dynamix and Get 20% Off Plus Free Whey!

Until 2nd February 2016, spend £35 or more at Protein Dynamix to get 20% off everything plus a free bag of WPC 500g chocolate brownie flavour with every order. To take advantage of this special […]

Until midnight Sunday 30th November 2014, get 20% of at Bad Boy’s UK website by using discount code BLACKFRIDAY at checkout! That’s 20% off a range of MMA fightwear and equipment including rashguards, MMA shorts, […]