I’m guessing we’ve all been there. It’s the end of the class and you are about to start 30 minutes of grappling against a variety of other students in the class. Kneeling on the dojo mat, you wait for the instructor to start the timer. Just as you touch fists with your opponent, your feet suddenly tighten up and contort. The dreaded foot cramp. And it hurts like a mother.

After patiently sitting through the pain, you manage to straighten your foot out of that awful looking position, which appears like you’ve been stood on by a horse, and you commence with your ground grappling, only for your foot to cramp up again. And again, and again, all the way through the session.

Almost everyone has experienced cramp during their lifetime whilst only a few experience it in martial arts. A couple in our class suffer from cramp regularly, specifically when grappling, and I’m one of them. It doesn’t happen every time I grapple but if I happen to get foot cramp once during the class, I’m guaranteed to be plagued by it for the rest of the session, having to halt the ground sparring every few moments because my little toe is pointing in the opposite direction from the rest of my foot. 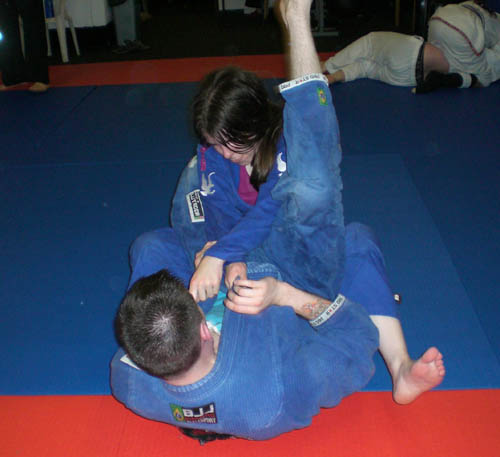 But what causes cramp?

The general consensus at my gym is that it’s dehydration – a lack of water. Now, I always makes sure I drink water throughout the day and also bring a litre bottle with me to class, and very rarely do I drink more one day than I do another. So if that was the case, surely I’d be suffering from cramp every session… right?

Another theory is lack of salt in the body. I like a bit of salt and eat salted snacks such as crisps, as well as adding salt to a plate of chips, but I don’t add salt to my food every day. However, there’s salt added to many products that I don’t need to physically add this condiment to my food, so could that be a contributing factor?

One reason I came across on the internet was lack of potassium. Now, if this is the reason, then I know I’m probably short of it. I used to eat bananas religiously every day and bananas are a great source of potassium as well as an energy booster if consumed before training, which is why you’ll see many martial artists scoffing one before a class. However, I’ve since become allergic to bananas and can’t touch the things anymore which leaves me lacking that all-important potassium boost.

An obvious answer would be that the foot is stressed, either from over-stretching the muscle or maybe even standing for an extended period of time. I’ve suffered foot cramp from the latter when wearing a dodgy pair of shoes once, and that cannot be the reason when you’re training barefoot on the mat, constantly moving, and I don’t think I’ve ever put too much strain on my foot muscles.

If you like to drink alcohol or smoke, then that could be a contributing factor, as this can cause dehydration and bad circulation due to lack of oxygen carried to the feet, not to mention filling the body with toxins. As I am teetotal and do not smoke, I know this isn’t the cause, although bad circulation could be an issue just on its own.

After experimenting with possible reasons, it seems that dehydration is a major factor in my experience of foot cramp during grappling. When I have had only a little to drink throughout the day and then train in the evening, I am plagued with cramp continuously for the duration of the evening’s session, even if I drink lots of fluids during class. So I have realised my downfall and am now making sure to drink plenty of water throughout the day so I do not suffer in the evening. There’s nothing worse than executing a perfect rolling choke only to lose it right at the end and be in more pain than your training partner whilst clutching your foot.

Do you experience cramp when training, and if so, what do you think is the cause behind it? Let me know in the comments below.

Welcome to November’s edition of Martial Artist of the Month, a section dedicated to YOU – the martial artists of the world. In this month’s edition, we interview Japanese Ju-Jitsu black belt, Chris Davies. Please […]

British martial arts company Blitz Sport are offering retail customers 25% off their order this weekend to celebrate Easter. All you need to do is use voucher code EASTER15 at checkout on their website before 6th […]