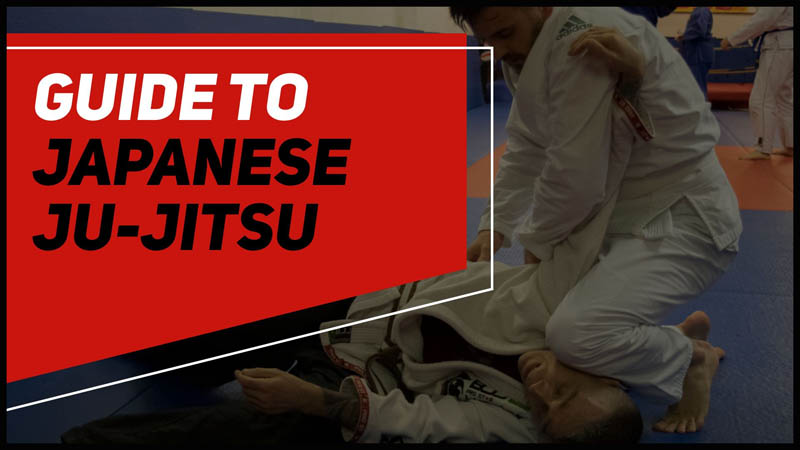 Japanese Jiu-Jitsu is a misunderstood martial art. A lot of people make assumptions about it because, unlike Karate, Judo and other martial arts styles, it’s not in the Olympics nor is it in the public eye as much as other styles so a lot remains unknown.  Even I, myself, as someone who’s trained Ju-Jitsu from being a child, continue to come across new aspects about the style that other clubs share and train.

With there being rather little about Japanese Ju-Jitsu on the internet, I’ve put together this guide to help answer some common questions. As far as I’m aware, the knowledge below that I’ve shared is true but if anyone knows differently, feel free to leave a comment in the section below.

The History of Japanese Ju-Jitsu

Ju-Jitsu originated from the battlefields in Japan between the 14th and 16th century, when the Shogun warrior would find himself disarmed. Using only his God-given limbs, the warrior had the skills to neutralise and defeat his armoured enemy unarmed at close range.

During the early 17th century, the martial art evolved to hand-to-hand combat against unarmoured opponents, with particular focus on striking to vital areas including the eyes, throat and neck.

By the mid 19th century, the dawn of the enlightened Meiji era saw the end of the samurai as the civil wars ended and thus many old ways of life were now redundant as the Emperor looked to reinvent and mould Japan to compete with the West. The traditional, brutal style of Ju-Jitsu was no longer necessary and so a young student by the name of Kano Jigoro developed the style of Ju-Jitsu into a less lethal art that relied on leverage and momentum to use a person’s energy against them. In the 1880’s, Kano opened up his own school teaching his own style of Ju-Jitsu, called Kudokan Judo where he counted Mitsuyo Maeda as one of his students.

Before the turn of the 20th century, a British martial artist by the name of Edward William Barton-Wright studied Ju-Jitsu in Japan and subsequently taught and developed his own style called Bartitsu when he returned to England in 1898. The style incorporated savate, boxing and stick fighting, as well as ju-jitsu. He also invited two experienced Ju-Jitsu practitioners over to England to share their knowledge of the art in the country. Their names were Yukio Tani and Sadakazu Uyenishi. These two professors of Ju-Jitsu went on to teach in England and become an important part of the teaching and studies of the art in Great Britain.

In 1918, the Women’s rights movement was particularly prominent. A female Ju Jitsu instructor and former Bartitsu pupil, named Edith Garrud, found herself training a bodyguard group of militant suffragettes how to defend themselves against the police.

Fast-forward to present day and Ju-Jitsu is prevalent in our society in two different forms. In 1914, Judo (Kano Jiu-Jitsu) practitioner Mitsuyo Maeda moved to Brazil and agreed to teach his friend’s son, Carlos Gracie. After years of intense training with his brothers, Carlos and brother Helio had developed their own system which they named Brazilian Jiu-Jitsu, a derivative of Kano Jiu-Jitsu (now known as Judo).

Atemi Ju-Jitsu originated in France in the 1940s by Bernard Pariset. Pariset revived the traditional techniques that were seen on the battlefield, focusing on effective techniques that could be used in real-life close combat situations and leaving out the ineffective ones. The word Atemi means striking and the martial art of Atemi Ju-Jitsu gives great importance to the act of striking vital areas to kill, injure or incapacitate before unbalancing, throwing, locking, pinning or strangling the opponent.

The law enforcement and military in many countries across the globe have embraced Ju-Jitsu techniques as part of their combat skills.

Japanese Ju-Jitsu is the less spoke style of martial arts. Perhaps because not much is known about it except from those who study the art itself or have been around martial arts for a long time.

Japanese Jujutsu is a very effective martial art, especially for self defence. It was practiced by samurais to use on the battlefield should they become disarmed.

Most people are familiar with Judo which is a sport-based martial art derived from Ju-Jitsu. It stripped away the dangerous techniques and combat element from it and the striking to be a pure throwing and grappling art.

Like all martial arts, how effective it is depends on what is being taught. In some traditional Japanese Jujitsu clubs, they opt for complicated, showy techniques that look fantastic in demonstration but wouldn’t do much damage in a street fight. Other clubs who train in Japanese Jujitsu tailor their technique purely for street defence, so it may not win any style awards for how it looks, but is extremely effective in a self defence situation.

You’ll find that with a lot of martial arts, the more brutal it is, the less flashy it looks. Though it’s not always the case, flashy techniques are usually the most unrealistic where a willing opponent is helping to make it work. Effective martial arts need to work with a non-compliant opponent and Japanese Ju-Jitsu has plenty up its sleeve to deal with non-compliant and aggressive attackers.

What Do You Wear To Japanese Ju-Jitsu Class?

A Japanese Ju-Jitsu uniform comprises of a gi. This includes a kimono jacket, trousers and a belt to tie round the middle to keep the jacket closed. Those starting in Ju-Jitsu wear a white belt around their waist until they pass a grading.

Though some shops do sell Japanese Ju-Jitsu gis, most jujitsukas wear either BJJ gis or Judo gis. Either of those provide a nice, thick collar and fabric for throws and grappling. As striking is involved in this style of Ju-Jitsu, it’s important that the gi is loose enough not to negatively affect movement. As some BJJ gi pants can be quite tapered and restrict movement, it’s better to go with a leg cut that allows for high leg kicks.

Some Japanese Ju-Jitsu students also wear the hakama which was traditionally worn by all men in Japan. It is worn around the waist, usually over the top of gi  pants, and is ankle length. Those who train in Aikido or Kendo always wear the hakama as part of their uniform.

Like other martial arts, traditional Japanese Jujitsu taught in the West follows a belt ranking system. Not all clubs follow the same belt colour grades, but the one I belong to ranks as so:

The Ju-Jitsu ranking grades from white to brown/white are called Kyu grades whereas black belt and above are Dan grades. Some Ju-Jitsu clubs rank their purple & white and brown & white belts before the solid colour. It all depends on the system of the club you belong to.

Sixth Dan and above is usually awarded as a “time-served” grade without any formal testing, providing the practitioner has been active throughout the years. However, there are some who prefer to achieve this grade by being formally tested. Sixth Dan and above grades can be recognised by their red & white striped belt.

Japanese Ju-Jitsu can be an absolutely devastating martial art if applied correctly. The no holds barred style means anything goes so this idea, along with the teachings of striking, joint locks, pins, pressure point attacks, groundwork submissions, shime waza strangles and chokes, not to mention the weapons training, helps to develop the student into a well-equipped individual. It’s the perfect martial art to learn should you require self defence skills.

Having trained in Ju-Jitsu for over 12 years, I can say it’s one of more nastier martial arts out there, along with Silat and Kali. Some people translate Ju-Jitsu as “the gentle art”, which I believe it’s anything but. A more accurate translation would be ‘the yielding art’ as the aim is to use an opponent’s energy and force against them.

Does Japanese Jujutsu have striking?

Striking is mainly used in Japanese Ju-Jitsu to defend and soften up their opponent or as a finishing move after a takedown. The pain from a strike can distract your opponent whilst you follow up with your subsequent technique. Most strikes flow with the technique being done, for instance a knee might be thrown during a standing guillotine.

Though there aren’t as many clubs as karate, judo and BJJ, the martial art of Japanese Ju-Jitsu still exists.

If you’re a fan of action movies, then you may have seen that Japanese Ju-Jitsu techniques were featured on the big screen in Keanu Reeves action-thriller, John Wick, which has helped to bring fresh eyes to the art.

No, I don’t think Brazilian Jiu-Jitsu is better than Japanese Ju-Jitsu. As someone who practices both these styles, I believe Japanese Ju-Jitsu is a better martial art because of its all-round approach. It has striking, takedowns, throws, joint locks and submissions, everything you could require from a martial art. The fact that BJJ also came from Judo, which itself was derived from Japanese Jiu-Jitsu, should tell you something.

However, if we’re talking purely about newaza (groundwork), then BJJ is the better art. To be honest, we are judging two very different martial arts that only share a passing similarity . BJJ is grounded pretty much exclusively in grappling whereas Japanese Ju-Jitsu is the epitome of all-round street defence.

BJJ is still quite a young martial art and sport and is being developed all the time. It borrows heavily from those that came before it, including wrestling, but then you have innovators who seek to explore new ways in which to trap, control and submit opponents. Eddie Bravo, for instance, is a fine example of someone who’s developed the style. BJJ is so extensive in its groundwork technique that Japanese Jiu-Jitsu cannot compete with it in that department. Though if we’re looking at martial arts as a whole, Japanese Jiu-Jitsu offers so much more to create a well-rounded individual martial artist. It also gives the practitioner an option of pursuing more in-depth studies in a particular area i.e. Muay Thai for improving striking, Judo for improving throwing, BJJ for improving grappling.

Are Weapons Used in Japanese Jujutsu?

Most Japanese Jujutsu clubs utilise weapons in some way. The martial arts weapons we use in Ju-Jitsu include bokken, tonfa, nunchaku and bo staff.

Ju-Jitsu clubs often train in defence techniques against an armed opponent as the samurais would have done on the battlefield. Though we won’t be meeting anyone on the battlefield like they were, knowing how to react to someone who’s threatening you with a weapon, such as a knife, is important for self defence. The answer is always run like the wind, but in situations where escape isn’t an option, weapon defence is a important strategy to train in.