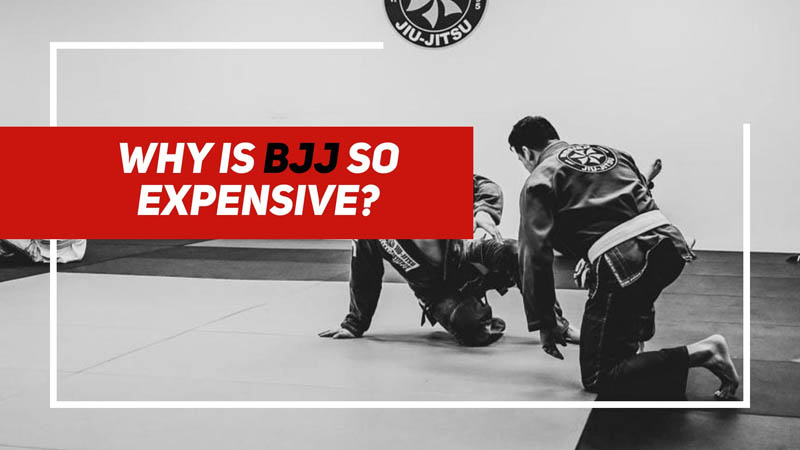 If you’ve noticed, BJJ schools seem to charge a heck of a lot more than other martial arts clubs, but why is that?

How much does BJJ training cost?

How much Brazilian Jiu-Jitsu costs all depends on the gym, location and competition in the area. Having done some research into the prices of gyms, BJJ costs more per month at gyms teaching BJJ exclusively compared to MMA gyms that offer a variety of martial arts classes, including BJJ.

In the North of the UK, you can expect to pay around £70 a month for unlimited BJJ sessions whereas in London it’s much dearer, on average £125 per month membership. This is likely down to the rates being higher in London.

BJJ gyms that offer fewer classes can be cheaper and more affordable to attend but if you want to go to an affiliated gym, such as a Gracie Barra or Gracie Academy, expect to pay a lot more than the average cost.

Why is BJJ so expensive?

BJJ is the hottest martial art right now. In the 70’s and 80’s, Karate was the biggest thing, only fuelled more by the release of motion picture The Karate Kid. By late 80’s, 90’s to early millennium, Muay Thai was getting more prominence in martial arts circles. Since 2010 onwards, the mantle has most certainly fallen onto Brazilian Jiu-Jitsu as the martial art to train. It’s young, it’s growing and much excitement is injected into this sport, not to mention the ‘lifestyle’ benefits it likes to promote. It’s also gaining more interest for females with high profile grapplers like Ffion Davies and Michelle Nicolini competing on the biggest stages showing women that they too can rise to great heights in the sports.

As there’s such a demand for BJJ, from kids to adults looking to learn, BJJ gyms can charge higher prices. If people are willing to pay then they’re going to continue to make a profit. This is exacerbated by a scarcity of clubs. If you live in a town with only one BJJ school nearby, then prices may well be higher because there’s no competition from other gyms providing the same service. However, with more people training, gaining their belts and opening up their own clubs, the market is gradually becoming more saturated which means more competition for BJJ school owners. This will either force the BJJ gyms to compete on pricing, where some may undercut others to attract members, or they’ll all charge similar to reap the rewards. Either way, having more schools available is better than one BJJ school having a monopoly over an area. If a BJJ club belongs to a certain organisation then prices may well be fixed by headquarters.

This goes hand in hand with demand. If a club is in high demand, it needs to have the premises to cater for large classes which means renting a bigger gym, room or hall in which to teach in. That also means more mats to purchase and higher energy bills. Growing a club to be large can be profitable but the cost of running the club goes up, hence why prices to participate at a BJJ club can be more expensive than other martial arts. There’s also the requirement of insurance for both the premises and indemnity for the instructor in case of injuries.

Then we’ve got to take franchises into consideration. I’m not aware of the actual fees, but if a gym decides to be affiliated under the Gracie Barra name, or another high profile gym association, there will usually be costs involved. This is because the name of the gym in itself can be enough to drive students to a gym or choose it over a competitor. Not to mention that the head organisation will put money into marketing the brand which, as a result, the franchisee or affiliated club will benefit from. Some people want the prestige of training at a certain affiliated school or maybe they prefer the style that is being taught, for instance 1oth Planet. If a club is a franchisee, it usually has to stump up an initial fee and then ongoing monthly fees to the organisation to remain a member and receive the benefits of being an official or associated club. Then there’s the purchasing of uniforms as some associations require students to only wear BJJ gis, rashguards and shorts emblazoned with their club or association logos.

Achieving black belt in BJJ is a long road to walk down. Compared to other martial arts taught in the West where belt systems are a thing, BJJ is perhaps the martial art with longest route for a student to go from white belt to black belt with it taking approximately 10 years for the average student who trains regularly. Not only that, there’s seminars and, in some cases, gradings to pay for. Whilst some gyms will provide stripes and belts free of charge and award them as they see fit in class, some BJJ clubs do run a grading or assessment session in order to assess students.

Imagine how much money it cost to regularly train at a BJJ club, attend the seminars, the gradings and perhaps compete (that can be £30+ per entry per comp). The amount of money spent on BJJ alone over a 10 year period, without even taking into consideration the gis, spats, rash guards and other clothing that goes with it, is a fortune. So it’s no surprise really that when a black belt runs their own classes or gym that they decide to charge what they do in order to recoup the cost it took for them to get to the level they’re at. As much as you’re paying for a lesson or class at the BJJ school, you’re paying for the instructor’s experience too.

Some martial arts school owners run their gym as a hobby in the evenings alongside their day job. It’s a passion project for them rather than a main source of income. There will be BJJ instructors out there who also run their club in this way, but there will be others who teach BJJ as their full-time job and so they’re looking to make an income from it. Taking into consideration the rent, bills and the rest of the costs of running a club, the BJJ instructor will want to make a decent wage from it and price it to what they feel is fair for their tuition.

Taught By World-Class Instructors Or Competitors

Training in BJJ can be expensive if you train at a gym that is either part of a well-known organisation, for instance Gracie Barra, or is run by a top instructor or competitor. BJJ gyms run by world-class Jiu-Jitsukas who’ve medalled at IBJJF events, PanAms or ADCC may well charge more at their school. You’re not just paying for classes but for the privilege of being taught by someone who has a wealth of experience and is a top name in BJJ. It’s like going to watch a gig – if it’s a local unsigned band, you can probably see them for free or for a few quid down the pub, but if you’re going watching The Rolling Stones, get ready to fork out the dough! You have to decide whether the level of teaching is worth the fees they charge. Some students like the idea of learning under a big name or affiliation.

Then there’s BJJ clubs who dominate at competitions. If a BJJ school has a record of producing quality grapplers who medal at events, then they may well charge more to reflect the quality of teaching.

These are just some of the reasons why BJJ is so expensive to learn. Is it worth it? Only you can be the judge of that. I’d always advise someone to assess the gym on what you’re being taught and if you’re learning and enjoying yourself. If it costs too much and you can’t afford it, then maybe it’s best to find a different gym or perhaps a different martial arts style or hobby until your financial situation changes. However, don’t turn your nose up at cheap clubs. There’s plenty of instructors out there who are decent and don’t charge the earth to train. In any case, it’s always best to visit a few gyms and see which one fits you best.

I absolutely love grappling, both gi and no-gi, and one of my favourite techniques to practice is the Bow and Arrow choke. I’ve yet to get it on anyone during live rolling but there’s still […]

It’s amazing how Tatami has grown over the last decade and they continue to innovate and bring new products to the line, including the latest in the series of BJJ gis, the Tatami Competitor Gi. […]