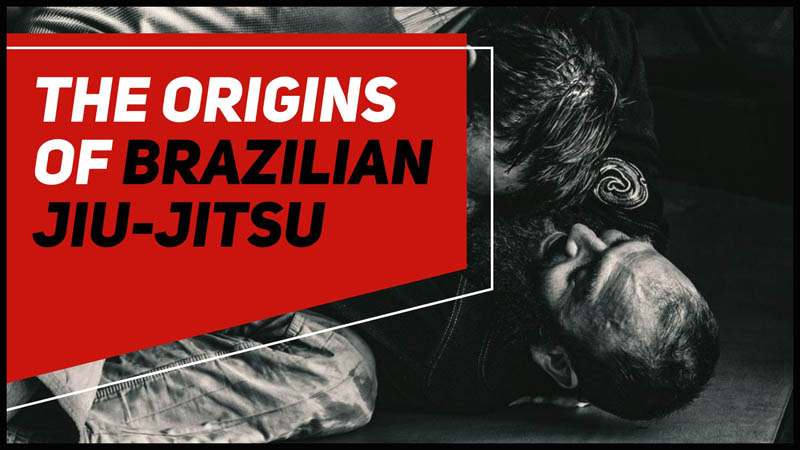 BJJ clubs are opening all the time around the country but what are the origins of Brazilian Jiu-Jitsu? In this article, we delve into the history of BJJ to see just how it was created into the sport we see dominating the martial arts scene today.

What is Brazilian Jiu-Jitsu?

Traditionally, BJJ is taught and practiced wearing a BJJ gi. However, many clubs now also train in no-gi BJJ, a variant which adapts the techniques accordingly so as not to rely on a lapel collar or sleeve to grip.

How Did BJJ Develop?

Brazilian Jiu-Jitsu (BJJ) is a martial art that evolved from Kodokan judo. The first documented reference to Brazilian Jiu Jitsu was in 1908 when it was referred to as “The Japanese Game of Jiu Jitsu”.

In 1914, Judo (Kano Jiu-Jitsu) practitioner Mitsuyo Maeda moved to Brazil and agreed to teach his friend’s son, Carlos Gracie. At the age of 22 and with a good solid 8 years of martial arts training, Carlos opened up his own club in Rio de Janeiro where he counted his brothers amongst his students. After years of intense training with his brothers, Carlos developed his own newaza system with youngest brother Helio; a boy who was 11 years his junior and was often too sick to join in with classes and so watched from the sidelines. When he did get to practice, Helio was unable to match the strength and power of his brothers and so would rely on leverage and timing to gain the advantage. They named their style Brazilian Jiu-Jitsu (BJJ), a derivative of Kano Jiu-Jitsu (now known as Judo).

Helio and Carlos Gracie’s Brazilian Ju-Jitsu, which concentrates on the ground grappling aspects moreso than the stand-up, took the world by storm in the 90’s after Royce Gracie participated in his brother Rorion’s martial arts tournament, the UFC, which would pit fighters of different martial arts styles against one another. The importance of having a well-developed ground game as well as a stand-up game is evident when faced with an opponent who’s skilled in stand-up striking. The locks and submissions of BJJ rely on leverage for the most part, and technical ability over strength, meaning the smallest person can overcome and defeat a much larger person if necessary.

What Was the Goal of Early BJJ Practitioners?

The goal of early practitioners of Brazilian Jiu Jitsu was to defend themselves and their allies from physically attacking adversaries. The grappling art originated in the country of Brazil, and its principles can be traced back to ancient martial arts. By the early 20th century, BJJ had spread to other parts of the world and evolved into a full-fledged sport. Today, Brazilian jiu-jitsu is practiced worldwide by fighters of all levels of experience and is an excellent tool for self-defence on the ground.

How Did BJJ Spread Around the World?

BJJ began to spread around the world in the 1980s. At that time, many martial arts schools were starting to teach BJJ because it was seen as a more effective style than other forms of grappling. This was further promoted in the UFC which gave the Gracie family a platform in which to challenge other styles to showcase the effectiveness of BJJ, irrespective of weight or size difference. Eventually, the UFC was sold and has since gone on to become the mixed martial arts competition we see today as fighter incorporate various styles into their routine, namely BJJ for grappling and submissions, and Muay Thai or Karate for striking.

Today, BJJ is practiced all over the world, including in countries such as Australia, Canada, Japan, Mexico, Portugal, United Kingdom and the United States.

Brazilian Jiu-Jitsu has evolved into an international martial art. It has been adopted by many different cultures and countries, as well as practitioners, some of whom have developed their own style by blending it with other martial arts. Two key examples of this are Erik Paulson, who used to train with Rickson Gracie and is a Professor under Rigan Machado, and Eddie Bravo, both of whom have developed their own no-gi variant that uses elements of BJJ amongst other styles such as wrestling, judo and catch wrestling.

At Shop4 Martial Arts, we love to discover new brands that bring that something exciting to the wardrobe of martial artists, and since appearing on the scene a year ago, teasing us with glimpses of […]