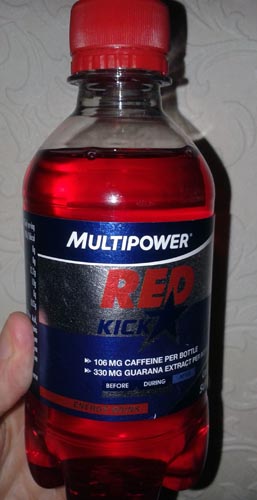 Sometimes it’s nice to have a bit of energy during your workout, especially when you’re feeling tired before class. If you easily become tired during training and need something to perk you up, an energy drink can be just the thing to consume either prior or during training.

In this review, I’ll be taking a look at such a product, Multipower Red Kick energy drink.

Multipower Red Kick comes in 330ml plastic bottles with screw on bottle top. With its red colour, it looks a lot like cherryade or, as one guy at the martial arts club I attend commented, Panda Pops. Despite its appearance, Red Kick is definitely one carbonated drink not fit for consumption by children, nor pregnant or breast-feeding women, with its 106mg of caffeine and 330mg of guarana extract content per bottle.

The drink itself smells really fruity, like berries, as soon as you remove the cap from the bottle. The taste is definitely fruity although I’m not sure what exactly. It tastes unusual and, although fizzy like your regular pop sold in shops, it has quite a flat taste to it. The flavour doesn’t come through as strong as the scent of the drink does though it’s a pleasant enough taste nonetheless.

I decided to take the drink before and during training in the evening. A few minutes after drinking around quarter of the bottle, the caffeine content kicked in, making me feel alert quite quickly. Fortunately whilst training, I was able to utilise the burst of energy provided by Red Kick during the padwork and exercise sessions to help push through instead of succumbing to tiredness. I took the opportunity to have mouthfuls of the drink at intervals in training which allowed me to continue getting the most out of my lesson without any side effects whatsoever.

Though it’s a bit too fizzy for my liking, Multipower Red Kick energy drink certainly does the trick and provides the much needed energy when consumed. The taste could be improved but overall it was an adequate enough flavour to consume with ease and pleasure to help me through my active, intense martial arts training.

Grab a Tub of MET-Rx Tru-Lean 908g for Just £14.95 TODAY ONLY at DeepBlue Supplements