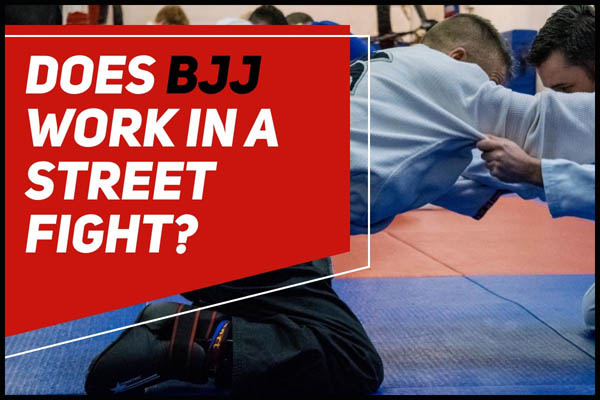 A question that pops up all the time is whether or not BJJ would work in a street fight? The answer to whether BJJ works for self defence or not isn’t quite as clear cut as it could be and below I’ll explain why.

Is BJJ Effective In A Street Fight?

Fighting In The Street

Whilst there’s no doubt knowing Brazilian Jiu-Jitsu can help you dominate on the ground, what is missing from most BJJ teachings is the fact that your opponent may seriously outweigh you, be armed, be resisting and may be raining down punches whilst you attempt to execute your technique. The more experienced an opponent in combat, the more trouble you’re likely to have. Practising sweeps and submissions with a compliant training partner is different to attempting to execute them in the heat of the moment with an opponent who’s looking to take your head off. If you happen to be fighting off the bottom then you’re more likely going to have to contend with strikes to the face so ideally you want to get out of harms way and stay mounted or take their back.

With adrenaline pumping and the possibility of an armed opponent, you need your wits about you. Whilst the first thing to do against an armed attacker is to run, sometimes you have no option but to defend yourself. Knowing how to get out of a range of situations is paramount which is why stand up defence is key.

When training BJJ, the idea of being punched whilst grappling is pretty alien unless you’re competing in Eddie Bravo’s Combat Jiu-Jitsu tournament. Learning to deal with that pressure, to protect your face and organs whilst reaching for a limb and furthering your position is harder than it looks and can be a shock to the system for anyone who’s never experienced it before. All your BJJ skills could go out the window in blind panic having to contend with actual physical harm.

No Holds Barred Versus Sport BJJ

When looking at whether BJJ works in a street fight, we have to look at what the art has been developed into and taught as. As BJJ is taught as a sport at a lot of gyms, some students are looking to score points rather than the round-ending submissions. In the real world, you want to nullify your opponent as quickly as can be and give them no chance to react. Point scoring mentality will work against you here – you need to be clever and work yourself to a dominant position and stop the fight as quickly as you can to limit the damage to yourself.

Another issue you may find in BJJ is being restricted by grade. At a BJJ open mat once, I was told I wasn’t allowed to drill a calf slicer as I was a white belt with no stripes. At the time, I was a brown belt in Japanese Ju-Jitsu and in that martial art there is no such thing about grades not being “allowed” to do certain techniques. Imagine if you were in a street fight and you were in a prime position to execute a submission but it was above your grade. Would the instinct to “do as you’re told” kick in? Would you decide not to opt for the fight-ending submission that’s right in front of you? That’s the problem. It’s mentally conditioning someone to not seek out that technique and they may have a mental block when it comes to using it in a life or death situation, all because they’re not allowed to train it in class or they’re not allowed to execute it at competition at that level. I am not a fan of hierarchical technique for that reason.

As Sport BJJ has rules, it is limiting itself and students as a self defence or combat martial art. In a street fight, there are no rules therefore you have to deal with the unexpected and the ‘forbidden’ or ‘illegal’ techniques that you’ve abstained from.

If you want to use Brazilian Jiu-Jitsu in a street fight or for self defence, as the BJJ game is predominantly ground based, you’ll want to get your opponent on the floor quickly which means taking them down. The problem is, some BJJ schools do not train proper throws like you’d see in Judo, Sambo or Japanese Ju-Jitsu. They might show a few leg sweeps or some which are self-sacrificing, meaning you go down on the floor with your opponent which isn’t the best idea unless you end up in the mount position. Some people lack experience in effective takedowns and resort to pulling guard which is a big no-no, as you’d ideally want to stay on top in a street brawl. 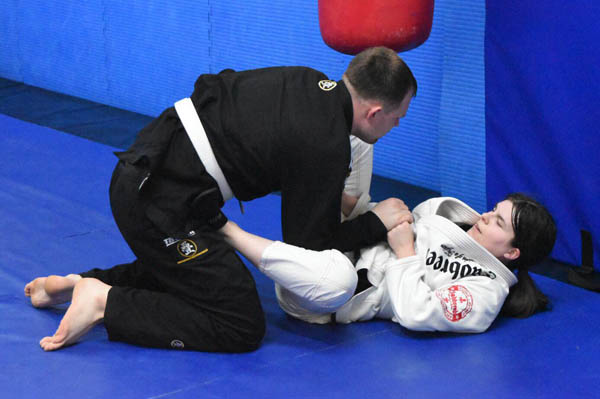 No Stand Up or Striking Defence

Street fights usually involve punching and kicking so you’re going to have to know how to defend yourself to not get knocked out or hurt, but also so you’re able to get close enough for a takedown. Martial arts like Kali, Silat, Combat Sambo and Atemi Ju-Jitsu have a well-established stand up and ground game which makes them a well-rounded martial art for self defence. Even Muay Thai’s parent art, Muay Boran, has a ground system called Muay Pram but it isn’t taught in all Thai boxing schools.

Unfortunately, BJJ’s effectiveness in a street fight is hindered by the fact that Brazilian Jiu-Jitsu is primarily ground focused which leaves jiujiteiros with a weakness. Being hit isn’t a fun experience and ideally you need to know how to defend, block, parry and counter attack. Unless you’re studying under the Rickson Gracie method of BJJ as a self defence system, you’re better off learning an additional striking martial art that provides the stand-up experience that you’ll need. You only need to look at MMA fights to know that you ideally need to be equipped with knowledge in both areas to stand a chance in a street fight.

Gi or No Gi BJJ

BJJ comes in two flavours: gi and no-gi. Whilst the two share a lot of similarities, there are differences that can make or break your grappling game. The gi-based BJJ involves the kimono jacket and pants being worn which provides a lot more handles to grip onto. The collar also allows you to push, pull, grip and choke in various ways that you’re not be able to do when wearing no-gi uniform, which is essentially t-shirt and shorts. In no-gi, you can’t grip the sleeve cuffs so therefore you have to work with gripping the wrists, biceps, triceps, lats and neck.

It’s best to train in both styles therefore you can get a feel for the technique no matter what your opponent is wearing. This is especially important should you ever get into a physical altercation with someone. If you’ve only ever trained in the gi and expect certain grips to be there but instead are faced with someone wearing a t-shirt or no shirt at all, then you might find yourself out of your depth.

So Would BJJ Work In A Street Fight?

BJJ techniques can work in a street fight and can be a great way of controlling, pinning and submitting your opponent however that doesn’t mean that solely training Brazilian Jiu-Jitsu is the answer to defending yourself on the street as you may come up short.

In some street fights, you may get lucky that you’re fighting someone without any experience or manage to find an opening where you can get your opponent on the floor and finish the fight using BJJ skills alone without taking too much punishment. However, I would advise that anyone looking for BJJ as an effective street fighting or self defence tool take up a striking-based martial art too to compliment the ground game.

Anyone looking for effective self defence skills needs to know how to punch, kick, block, defend against strikes, get out of grabs and holds, perform takedowns and be experienced in grappling as you never know who you’re going to find yourself up against. Being just a striker or just a grappler means you’re fighting with half a game. Add the knowledge to help you become a complete fighter by bringing the striking and ground systems together.

Tatami Fightwear have launched a brand new gi into their basic line: Nova+ Plus BJJ gi. Following on from their Nova BJJ gi, the Nova+ Plus range is exactly the same but with added bling. […]

As we enter the final month of 2013, we welcome both Christmas along with our latest Martial Artist of the Month, writer and BJJ martial artist Sally Arsenault! Hello Sally, please can you tell us […]

Training in Ju-Jitsu, we cover groundwork, looking to improve our skills in grappling our opponent in the hopes to submit them. Whilst mostly we train in the gi, there are times when we ditch the […]