I don’t use pre-workout supplements every time I train. I usually only use them when I know I’m going to train hard and I want the extra energy to help me get the most out of my workouts, especially if I’m feeling a bit tired beforehand.

In this review, I’ll be sharing my thoughts on MusclePharm Assault in Raspberry Lemonade flavour. 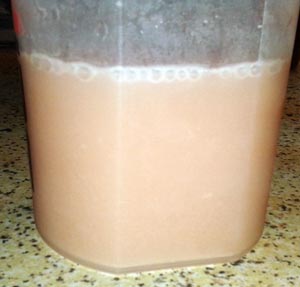 The kind folks at MusclePharm sent me a sample of MusclePharm Assault pre-workout supplement in the post after I heard my teammate speak very highly of the powder. The single serving arrived in a thin, narrow packet and contained a 14.5g serving.

Upon opening the packet, the MusclePharm Assault Raspberry Lemonade pre-workout powder certainly smelt fruity and pouring it into the shaker bottle and mixing it with water, it turned into a pastel yellow/beige colour.

When drinking the mixture, I couldn’t really taste the raspberry or the lemonade and it was hard to tell what it actually tasted like. It was pleasant enough to consume though. I mixed it with 300ml of water and consumed the formula at 7.30pm, 30 minutes before my evening Ju-Jitsu class.

My friend at the gym who takes MusclePharm Assault regularly always takes half a serving and now I know why. I’m half his size and just over half his weight but consumed a full serving. MusclePharm Assault is potent stuff, without a shadow of a doubt. I was roaring with energy by the time 8pm came and was managing to tear through the exercises and padwork and sweating a fair bit whilst I was doing it. Even after two of three rounds of padwork combinations, I was still raring to go, be it more striking or grappling on the ground.

When it came to having to stand and watch the instructors teach the next technique, I found that the pre-workout gave me an immense amount of energy, so much so that I found it hard to stand still and my mind began to wander. In that respect, Assault didn’t give me the clear mental focus that BSN N.O. Xplode 3.0 did but I was bouncing with energy that I could have trained all night if I had wanted to.

I feared when I went to bed that night that I might not sleep but I am pleased to say I slept soundly. When I awoke the next morning, I could tell that I still hadn’t come down off the pre-workout but it wasn’t like having Speedy Gonzalez running around in my head which sometimes happens with potent pre-workouts. I did notice, however, that when holding a glass of water which I had prepared for breakfast, I was involuntarily shaking. My entire right hand was shaking so much that I nearly spilt the contents of the glass and I had to put it down on the table.

By about dinnertime, the shakes had stopped as I had comedown off the pre-workout without any crash but the shakes is certainly something I’ve never experienced before with a pre-workout. I felt okay but it would seem that the serving was a bit too much for my little body to handle.

And although a lady will never admit she does such a thing, MusclePharm Assault can also make you a bit gassy.

The MusclePharm pre-workout also contains tree nuts (coconut) and was produced in a facility that may also process ingredients containing milk, eggs, soybeans, shellfish, fish, treenuts, wheat and peanuts therefore if you’re allergic to any of these you will want to avoid this particular supplement.

The taste could be better and the windy side effects are unwanted but as a pre-workout to give energy to help you push through your weight lifting, martial arts or sports training, MusclePharm Assault is more than suitable.

Supplements company GoNutrition have just released some awesome voucher code deals to help you in the gym this October! Check them out! Bronze Packs PRICE SLASH! New customers, get 20% off bronze packs! (valid on […]

We’d like to welcome Athlete Store, a nutrition online e-store, to Shop4 Martial Arts. To celebrate the launch of their new website, they’ve got some fantastic offers on for those who take sports nutrition and […]

How would you love to save some money at Myprotein? Now you can with these awesome discount codes and deals for October 2014. Free UK Standard Delivery when you spend £25 (Customer must add product/s […]