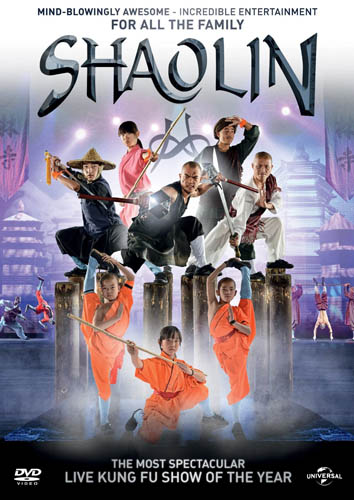 After a successful theatre run in the UK, the Shaolin Monks SHAOLIN show is coming to DVD and Blu-Ray on 30th November 2015. The performance features 20 members of the Pagoda Forest Shaolin Temple recreating the history of the Shaolin monks to both entertain and educate the audience.

Legend has it that in the early days of the Shaolin monks, the Emperor hired the monks to fight for him which they reluctantly agreed to hoping te outcome would be peace. After their epic triumph though outnumbered, the Emperor rewarded the monks for their courage and success. However, the Emperor became paranoid when they refused his gift and thinking that these skilled men could turn on him at any moment, he wiped the monks out except for 5 children. These children grew up to be the elders, spreading the Shaolin message and practice of Shaolin Kung Fu to eventually return to the Pagoda Forest temple and face the Emperor and his armies once more.

The skilled cast, featuring a mixture of men, women and children of both sexes, use their martial arts prowess, extraordinary flexibility, balance and discipline to tell the story and wow the crowds with their exceptional ability. Youngsters display magnificent flexibility from the splits to contorting their body into shapes I could only dream of doing whilst the adults expertly demonstrate the use of a variety of weapons including spears, Chinese broadswords and three-sectional staff. For any martial artist with an interest in kobudo, the Shaolin Monks put on a mesmerising show with their faultless display of weaponry.

Most of the show is dedicated to telling the story of their ancestors, the very first Shaolin Monks, with movement being the key driving narrative to convey the legend to the audience. The stunning movement, some of which is synchronised, makes you watch in awe at the timing, coordination and discipline these individuals have mastered and continue to study.

Whilst there’s an odd display of strength here and there, most are performed towards the final 15 minutes of the 95 minute show. See a Shaolin monk do press ups with his index fingers only and, more incredibly, perform a handstand with index and middle fingers before using just his index fingers. I’ve never seen this feat of pure strength before now and it will no doubt amaze viewers who watch the performance too. The event also showcases monks balancing themselves on sharp objects and breaking materials with their body with the aid of chi energy.

In essence, SHAOLIN is quite an impressive watch although I don’t think it translates as well onto DVD as I would have liked. Of course, these types of events are better seen live but if you’ve missed the performances or want to re-live them, then DVD or Blu-Ray is the only way you can do so. The parts in which it seems to struggle is the theatrical side of the performance, which can get a little monotonous, though I’m sure it would have been spectacular live and thus appreciated more. Much like watching your favourite band play live, a recording of a performance can’t always do it justice or truly recreate the brilliance seen on stage.

Nevertheless, SHAOLIN is a beautiful performance from a talented group who’ve shown what can be achieved if you put your mind to it. An inspiring slice of entertainment.

Win WRESTLEMANIA 29 on Blu-Ray In Our Competition!

COMPETITION NOW CLOSED At the Show of Shows, John Cena has one chance to redeem himself for the loss that has been tormenting him for a year when he challenges the man who dealt him […]