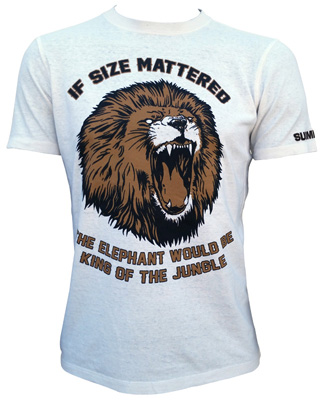 A couple of weeks ago, I reviewed the ‘The Ground Is My Ocean’ Hemp BJJ T-Shirt from Jiu-Jitsu clothing company, Submission Fight Co., which was the first of two brand new BJJ t-shirts from the brand.

In this review, I’ll be sharing my thoughts on the second design, the Submission Fight Co. ‘If Size Mattered’ Lion Hemp BJJ T-Shirt. 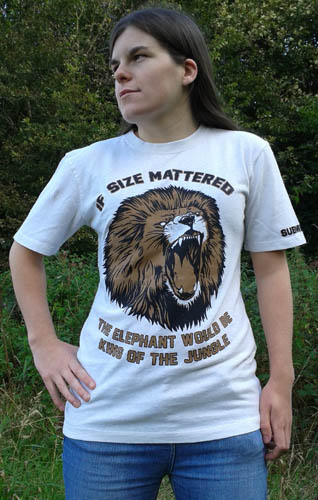 Continuing the subtle slogan yet striking imagery theme of their previous t-shirt, Submission Fight Co. have come up with a design just perfect for my small stature. The slogan reads “If size mattered, the elephant would be the king of the jungle”. The slogan is actually a quote from BJJ legend Rickson Gracie, who was well-known in his heyday to put his opponents in painful submissions, regardless of their size. As someone who trains with big guys all the time and has competed against bigger women (it’s hard to find an adult smaller than myself, to be honest), I can relate to the quote. In BJJ, the submissions mostly rely on leverage, where size doesn’t really come into it, so if your skillset is better than your opponent, usually you can beat or at least give a good battle to those who are bigger than yourself. Thus, it is the lion on the front of the t-shirt to accompany the slogan, rather than the elephant. The use of the lion shows that predatory aggression and success mentality, along with the hunting (grappling) skills will help you take down your opponent, regardless of size. Leo happens to be my sign of the Zodiac, which makes this t-shirt that extra bit awesome!

The lion design on the t-shirt is of a snarling lion’s face with it’s jaws open wide, framed by its wild mane. Brown, black and white make up the colours of the lion’s face which, along with the black/brown text with brown/black outline, is screenprinted onto the beige t-shirt. The left sleeve is also screenprinted with the Submission Fight Co. logo in black text with with brown outline detail.

One of the best ideas, which I wish more brands would adopt, is that the fabric contents and washing instruction label is nowhere to be seen. Instead, the information is printed on the neck of the t-shirt, giving you all the necessary details without the itching or irritation often caused by traditional fabric labels.

Just like the Shark t-shirt, the ‘If Size Mattered’ Lion t-shirt is made from 55% hemp and 45% organic cotton. Submission Fight Co. had a lab test the fabric which confirms the hemp content. You can read the full report here

As a ladies size 12 or womens medium, I opted for the unisex size Small from Submission Fight Co., which is what I assumed would be the correct fit for my size and is the smallest size that the brand actually make. Usually there are size differences between UK and US sizes, but size Small fits me pretty well, as you can see from the photograph above. The sleeves are above the elbow and are a nice length, and the length of the t-shirt itself is just past the hips. The t-shirt isn’t fitted to the body, but it isn’t overly baggy either. The size is pretty bang on for how I like my unfitted t-shirts and it hangs nicely on the body too.

I measured the t-shirt before washing and again after the first wash to check for any shrinkage of the fabric, which usually occurs with t-shirts and other apparel.

As you can see, the shrinkage is identical to the Shark t-shirt, which is what I expected as they are both the same t-shirt and size, just different colour.

Whilst I washed the t-shirts separately, I washed them identical to each other, as per the instructions on the neck of the t-shirt. I washed the Lion t-shirt on a delicate wash, cold at 700 spin for around 20 minutes to suit the hemp/organic cotton fabric and both the t-shirt and print look fantastic. Unlike the Shark t-shirt, the Lion t-shirt could benefit from a bit of an iron after it has been washed and dried on the maiden but that’s maybe because lighter colours show creases more than darker colours.

The Submission Fight Co. ‘If Size Mattered’ BJJ t-shirt is lightweight, strong and very comfortable on the skin. It’s soft to touch and you can feel the natural aspects of the fabric when wearing it. Being a light coloured t-shirt, it’s ideal to wear in the sun to reflect the rays but ladies, make sure to not wear a dark coloured bra underneath as it can be a bit noticeable under a t-shirt such as this.

Featuring a powerful slogan, which many practitioners in BJJ can relate to, coupled with the impressive print of the fierce lion, the Submission Fight Co. ‘If Size Mattered’ Hemp BJJ t-shirt is a striking piece of apparel that can be worn both on the mat and casually off the mat. I really like how the design is gender neutral and I feel good wearing it as any male would.

The hemp and organic cotton blend fabric of the t-shirt is so comfortable, durable yet lightweight in its own right, that it feels good to wear in the sunshine and doesn’t make me feel hot which some other fabrics can do.

As a pint sized grappler, this is an ideal t-shirt for me, both as a statement in BJJ and life itself, and its non-obvious slogan means it can be appreciated by any martial arts practitioner, not just those who study BJJ, as well as those who don’t train at all.

At $39.95 (approx £24 GBP), the t-shirt is competitively priced with other BJJ t-shirts on the market. Being crafted from hemp blend gives the t-shirt extra appeal over the standard 100% cotton ones.

A fine quality t-shirt sporting a fantastic, bold design, the Lion Hemp BJJ t-shirt will make you roar with delight!

Everyone seems to be getting into the spirit of Father’s Day, which is this Sunday 15th June 2014, and to celebrate, BJJ brand Roll Supreme are offering 10% off your order when you use voucher […]

Fightwear brand Gawakoto are offering 20% off their products, including t-shirts, rash guards, vale tudo shorts, BJJ gis and jumpers until 1st December 2014 as part of the Black Friday and Cyber Monday deals. Only […]