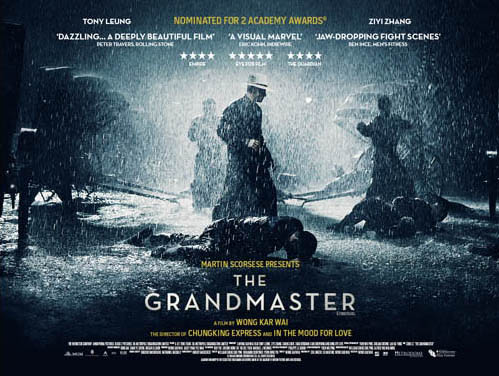 A fight is organised in a Foshan brothel between the head of the Gong family of the North of China and Ip Man of the South. After Ip wins the challenge, Gong’s daughter demands a match up between herself and Ip Man as her family have never lost before. Her 64 Hands system versus Ip Man’s Wing Chun proves impressive and inspires Ip Man to learn more about their martial art. The invasion of the Japanese scuppers Ip Man’s plans and the two martial artists find themselves on different paths: one to seek revenge against a successor and restore their family honour, the other to provide for their family.

The Grandmaster is a stylish tale about love, passion, honour, betrayal and family, which uses various systems of kung fu martial arts amidst drama to explore the life of Ip Man, his relationship with the Gong family and the birth, life and death of martial arts. Tony Leung stars as Ip Man, who’s widely known in the martial arts circles to have spread Wing Chun to the masses. Whilst the film acts as a biopic of Ip Man in a certain part of his life, it also focuses on the life of fictional character Gong Er, the daughter of Master Gong Yutian. Crouching Tiger, Hidden Dragon star Ziyi Zhang plays Gong Er, a talented, passionate young woman who’s love for her father and her family’s honour and martial arts captivates Ip Man. The journey they both make from their first to second meeting is explored, and both go down two very different paths.

There’s a fair variety of kung fu on display in The Grandmaster. From Bangua to Wing Chun, each style has its moment through epic fight scenes, from inside a brothel to a train platform. An opening scene with Tony Leung’s Ip Man defeating a mass of angry males on a dark rainy night looks brilliant, but some really fast editing and slow-motion closeups of Ip Man’s long jacket gliding across the deep water means that the director has opted for style over substance. It all looks rather good, but from a martial arts perspective, many of the fight scenes are cut, shot and edited in such a way that it’s hard to actually see what’s being done. Practitioners of Wing Chun and martial arts in general may feel a little frustrated by this. Ultimately, the martial arts are used as a means to tell a story about Chinese history with martial arts, and the combat scenes reflect this as well as reinforcing the film’s sub-plots.

The Grandmaster is quite a beautiful film. It’s thoughtful, even if a little disjointed at times, and reflects upon life through a difficult time. The story is enough to engage the viewer through the potential love/respect storyline as well as the revenge plot. Fans of Ip Man’s work will be pleased to see his role of teaching Bruce Lee is recognised, giving a few seconds screentime to a young boy who actually has a look of Bruce Lee. Though it leaves a little to be desired from a martial arts perspective, The Grandmaster is a graceful, stylish epic that pays respect to its country’s martial arts history.

AMERICAN SHAOLIN (1991) aka NO RETREAT, NO SURRENDER 5 Directed by Lucas Lowe Written by Keith W. Strandberg After being beaten and humiliated in a karate tournament against dirty kickboxer Trevor Gottitall (what a name!), […]

IRON MONKEY (1993) Directed by Yuen Woo-Ping Available on Blu-Ray from Amazon A Robin Hood-style hero named Iron Monkey robs from the rich and corrupt to feed the poor and needy, much to the anger […]

After a successful theatre run in the UK, the Shaolin Monks SHAOLIN show is coming to DVD and Blu-Ray on 30th November 2015. The performance features 20 members of the Pagoda Forest Shaolin Temple recreating […]