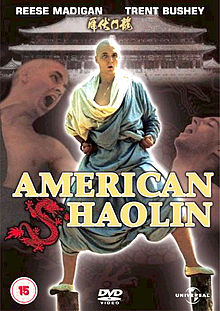 AMERICAN SHAOLIN (1991)
aka NO RETREAT, NO SURRENDER 5
Directed by Lucas Lowe
Written by Keith W. Strandberg

After being beaten and humiliated in a karate tournament against dirty kickboxer Trevor Gottitall (what a name!), Drew Carson decides to travel to China to learn Kung-Fu from the Shaolin monks. Drew thinks it’ll be as easy as walking straight into the Shaolin Temple but he’s stunned to discover the hostility towards him as a brash American foreigner. Undeterred, he proves he’s willing to learn under the masters and is eventually allowed into the fold. Learning the way of the Shaolin won’t be easy, as Drew quickly finds out, but will he be able to control his impatience and rebellious attitude in order to reach his full potential?

AMERICAN SHAOLIN, said to be the fifth NO RETREAT, NO SURRENDER film, is a hammy but fun-natured martial arts movie telling that oh-too-familiar tale of an underdog’s rise to seek vengeance against the destructive bully on the martial arts scene. Despite its familiar grounds, the film’s likable, cheeky attitude is what makes the film so darn watchable, even if the leading character is a little annoying initially. Drew’s yearning to train in China depicts him as a respectable young man but he’s anything but humble upon his arrival and needs teaching a lesson. Though he eventually learns from his mistakes, this character trait continues to bite him in the bum as he gets into trouble with his Shaolin monk masters and fellow disciples, especially Gao (played by Lost star Daniel Dae Kim). Wanting to learn Kung Fu straight away, Drew is disgruntled by the fact he and his fellow students have to toil away, day after day, breaking up stone and cleaning floors. Living in such strict quarters doesn’t stop Drew enjoying himself though as he teaches his peers a little bit about American rock-n-roll, specifically Eddie Cochran’s Summertime Blues albeit with a slight Shaolin-esque lyric change.

When the film finally gets down to some martial arts action, it doesn’t disappoint. From the students to the masters, we see everyone training both in the Temple and outside as the youngsters get themselves into scrapes with the locals. Kung Fu is quite a beautiful, controlled martial art and we see how relaxed it’s performed by those in the film. The choreography isn’t the most mind-blowing when compared to other martial arts films but the quality is there and compliments the film wonderfully. Any martial artist will surely appreciate the action on show, as I did.

Overflowing in cheesy 80’s style, AMERICAN SHAOLIN is definitely an acquired taste and will probably disappoint action freaks but then again, this is a film for martial arts fans, not action film fans. A few more Kung Fu scenes would have been great but there’s plenty on offer here to enjoy with a story that just about gets away with it.

After a successful theatre run in the UK, the Shaolin Monks SHAOLIN show is coming to DVD and Blu-Ray on 30th November 2015. The performance features 20 members of the Pagoda Forest Shaolin Temple recreating […]

IRON MONKEY (1993) Directed by Yuen Woo-Ping Available on Blu-Ray from Amazon A Robin Hood-style hero named Iron Monkey robs from the rich and corrupt to feed the poor and needy, much to the anger […]