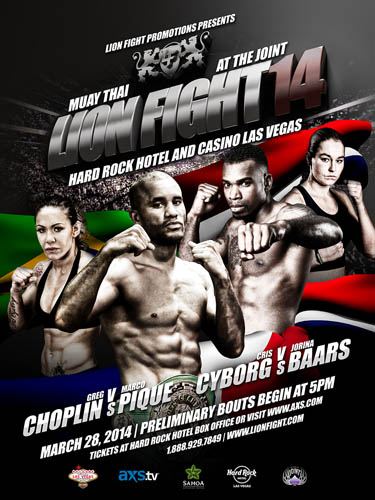 Chute Boxe fighter Cris Cyborg will be returning to Las Vegas to take on Jorina Baars at Lion Fight 14, which will air live on AXS TV.

If Cyborg wins the fight, she will be a champion title holder in two sports, having already won the Invicta FC Featherweight title.

This upcoming Friday 5th April, get ready for the show of a lifetime as 26 pro female MMA fighters battle it out in 13 bouts at INVICTA FC 5, headlined by Jessica Penne vs Michelle […]

May Bank Holiday weekend means discounts so what better time to get some new gear for Muay Thai and MMA class than now. Until 2nd May 2016, get 20% off everything at Sandee so whether […]

BLACK FRIDAY: 25% Off at Sandee For One Day Only

Muay Thai specialist brand Sandee are offering 25% off everything except sale items on their online store TODAY ONLY as part of the Black Friday sales. Get 25% off Thai pads, boxing gloves, punch bags, […]