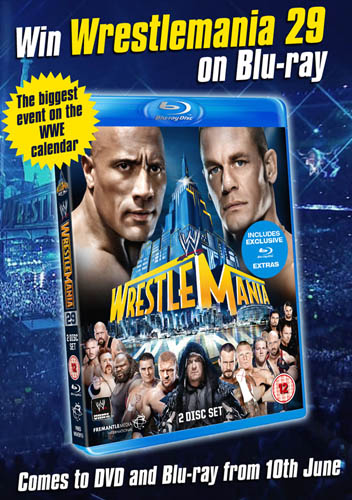 At the Show of Shows, John Cena has one chance to redeem himself for the loss that has been tormenting him for a year when he challenges the man who dealt him that agonizing defeat, The Rock. And this time, the WWE Championship is on the line. A brash, remorseless CM Punk seeks the ultimate claim to immortality by attempting to do what no one has done before him – defeat the Undertaker at WrestleMania, ending his double decade-long Streak. Brock Lesnar and Triple H collide in a No Holds Barred showdown where The Game’s illustrious career is on the line. This is the place where legends are made. This is WrestleMania.

To celebrate the arrival of the biggest event in the WWE calendar, Wrestlemania 29 (FremantleMedia), arriving on Blu-ray and DVD on the 10th of June 2013, we have a copy on Blu-ray to give away to one lucky winner!

Follow us and RT for your chance to win @WWE WRESTLEMANIA 29 on Blu-Ray courtesy of @WWEHomeVideoUK! UK entries only http://t.co/lFHZBNdeXd

T&C’s
• This promotion is open to UK residents only.
• Entrants must be 12 years or over
• One entry per household
• There is no cash or other alternative to the prize stated and the prize is not transferable and no part or parts of the prize may be substituted for other benefits, items or additions.
• 1 winner will win 1x WWE Wrestlemania 29 on Blu-Ray
• The Editor’s decision is final and binding on the entrants. No correspondence will be entered into.

WWE ROYAL RUMBLE 2013 On DVD and Blu-Ray from 15th April 2013 Royal Rumble is one of my favourite WWE events. What other chance do you get to see 30 wrestlers brawling in a ring. […]