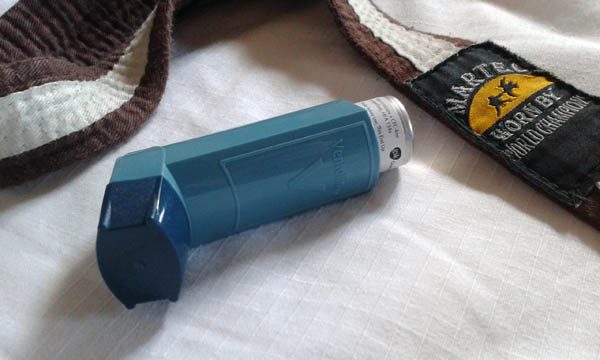 Asthma is a respiratory condition which causes difficulty in breathing, particularly after exercise or exposure to some allergen. Acording to statistics, there are 5.4 million people in the UK who suffer from asthma with it affecting around 1 in 12 people.

I was first diagnosed with asthma when I was four years old and I remember it quite well. I suddenly fell ill one night, struggling to breathe, and liken it to, what I can only imagine is like, drowning except not being underwater. Fighting for breath is a frightening thing and after my parents rang the ambulance,  it was then that we were informed that I was experiencing an asthma attack. I can’t say I recall being short of breath before this point but this was definitely the start of my long history with asthma.

If you’re reading this and too experience asthma, then you, like I, have probably been prescribed the brown and blue inhalers – becotide preventer and ventolin reliever. Over my school years, I relied on these to help me get through the day, especially during P.E. when I would have the blue inhaler with me constantly to take whenever my asthma was triggered. Into adulthood, however, I found I needed my inhalers less but still depended on them whenever I decided to do anything remotely cardiovascular. This was the case until I took up martial arts after a 10 year lay-off.

Going back to Ju-Jitsu in 2012 at the age of 23 and dabbling in Muay Thai, I found that I still had to take my blue inhaler with me. The intensity of the training and the running up and down the dojo only seemed to aggravate and kickstart the breathlessness. This went on for quite some time and would flare up more during stressful situations such as gradings and competitions.

Having been consistently training for almost four years now, I have seen a vast improvement in my asthma. I stopped taking the brown inhaler many years ago, carrying only the blue inhaler with me in case I needed it. As time has progressed, the need to use my blue reliever inhaler has drastically reduced and I often find that I can alleviate my symptoms by breathing slowly and deeply, and in more recent times I haven’t even experienced the breathlessness during class that I used to suffer from.

Last week I went for my annual asthma checkup at the doctor’s surgery. I can’t remember the last time I took my ventolin blue inhaler which is really positive seeing as I train 3-4 times a week.

During every annual asthma check-up, I’m weighed and then I have to perform a peak flow test.

Standing on the scales, the nurse informed me that I’d lost a couple of pounds since last year which didn’t surprise me as I felt the fittest I’d ever been.

The peak flow test measures how much air flows out of your lungs. By performing the peak flow test, you blow into a meter three separate times and your results are recorded. The best result of the three is the one that goes down on record. Straight off the bat, I took a deep breath in through my nose and blew as hard as I could into the peak flow meter and reached 470 which astonished the nurse. This was up from my 430 last year. To put this result into perspective, she said that a healthy female my age and weight who didn’t have asthma would blow around 430. I smashed this by blowing an extra 40 and I have asthma!

Is my asthma cured? Although I’d like to say yes, I somehow doubt it and the nurse herself said that she didn’t want to say I’m cured either as asthma is a condition which can be controlled but very rarely cured. However, it would seem that martial arts, in particular my Ju-Jitsu and CSW, have played a major part in my improvement. The nurse said she’s had asthma patients who actively swim often but who still suffer from asthma and see no real improvement. She suspects that the controlled breathing in my martial arts training has acted like a kind of lung physio, strengthening my lungs so that my airways can become wider and clear when I need them to rather than it being like sucking air through a straw and being breathless.

In my Ju-Jitsu training, we jog and sprint up and down the gym, we do padwork, grappling, throwing and so much more. It really is a full body workout and every inch of you is sore the day after. There is no doubt that Ju-Jitsu and martial arts has improved my asthma, but has it cured it for good? Only time will tell. I’m most prone to asthma during the winter months when it’s cold and I become breathless easier as the sharp bitter frost takes my breath away. With the cold can also come chest infections and it’s those which I still have concerns about. Going off past experience, chest infections kick off my asthma something rotten so I’l be interested to see how I cope over the next few months as we enter the chillier season.

With my black belt grading approaching next year and with competitions that I plan to enter, these will be the real tests to prove whether or not martial arts can cure asthma. I have no doubt that martial arts has improved it to the point of being virtually unnoticable but can it go that extra mile and rid me of asthma for good? If I continue to participate in martial arts, I think it will. Having never smoked, my daily health has put me in a great position and as long as I keep training, I think that’ll I’ll be alright. I daresay that the improvements may be undone should I ever decide to quit and sit on my backside all day which is why it’s important for me to keep an active lifestyle that will keep me healthy throughout my years.

For those who’re interested in taking up martial arts but afraid their asthma may hinder their performance, I heartily recommend you get involved. At first you will suffer as you will always have done with any exercise but as you continue training and progress, you may just see an improvement like I have, one that may change your life for the better and almost, if not completely, cure you of your condition.

On weekends and sometimes during the week, I like to train in no-gi grappling. When you train in the gi all the time, you can sometimes forget how to grip people by their limbs instead […]