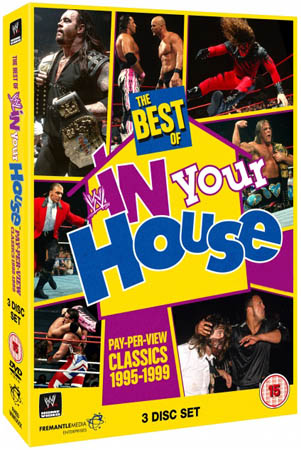 WWE The Best Of In Your House has finally arrived in the UK.

This 3-disc DVD/2-disc Blu-ray set encompasses some of the best matches that took place on In Your House events between 1995 and 1999 and is available to order now at WWE DVD.co.uk

You can see a clip focusing on the match between The British Bulldog vs. Bret Hart taken from this release below

For decades, WWE Superstars have sworn allegiances at Survivor Series, confronted the chaos of the Royal Rumble and braved the harsh steel cage of Hell in a Cell. But before all this, there was only one match designed to wreak the ultimate havoc on all who dared to enter: WCW’s most infamous innovation – WAR GAMES! Now, for the first time, own all the greatest battles from inside this multi-caged combat zone.

The mind behind the mayhem, WWE Hall of Famer Dusty Rhodes, takes you inside his most famous creation, presenting punishing matches featuring Rick Flair and The Four Horsemen, Sting, The n.W.o., Chris Benoit, Lex Luger, The Road Warriors and many more!

This title is available to pre-order on DVD and Blu-ray now at WWEDVD.co.uk and set for release on 1st July 2013.

From the writer of “The Grandmaster” comes THE SWORD IDENTITY, a legendary tale of a lost style of martial arts that will thrust you straight into the action. Breathless momentum that deals rapid blows, with […]

Win SHAWN MICHAELS MR WRESTLEMANIA on DVD In Our Competition!

COMPETITION NOW CLOSED! Shawn Michaels and WWE’s biggest annual event go hand-in-hand. He’s been involved in so many memorable matches and now is your chance to relive these classics along with comments from the man […]